What floats, is nominally made of silver and worth its weight in silver on ebay? Epic Silver Towers of Tzeentch, of course!

Here's my version for 2020, kitbashed out of lovely parts from newer plastic ranges: 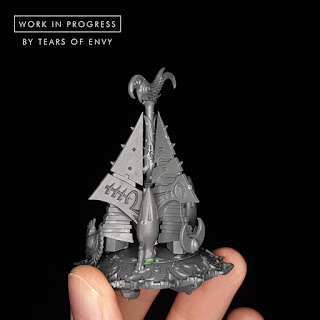 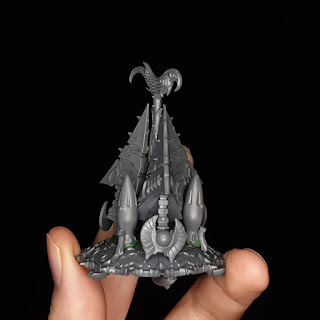 I've always adored the lore surrounding Silver Towers - they strike me as opulent, menacing and fractal, perfectly exemplifying their patron god. Unlike many other Chaos engines they transcend IPs and feature in all three of 40K, Warhammer* and Age of Sigmar. Of course the Age of Sigmar Warhammer Quest explored just such a tower and I was fortunate enough to make the logo when I was in the Studio:

Anyway, as my little Epic collection grows I thought a tower would be the perfect addition to the Chaos side. The old Epic models are both somewhat pricey on ebay and are a design of their times, not quite evoking the splendour of more modern depictions of the towers.

So I decided to kitbash one out of modern plastic parts. It has been so nice to see the Tzeentch range get fully fleshed out for 40K and AoS in recent years and this provides a wealth of bitz to cannibalise. Add to this some appropriate Aeldari and Drukhari parts and you, mi auld mukka, can be the proud owner of your very own silver tower! My version is pretty chonky compared to the old metal ones making it reassuringly ominous as it slider over the heads of the bewildered Imperial troops below.

More photos soon of course as I add the finishing touches and start to paint it.


*Arguably - Dave Gallagher's silver tower picture appears on p9 of the 8th edition Warhammer Daemons army book, although they're not mentioned in the text I don't think. Things called Bane Towers appeared in Man-O-War which could have been an attempt to do the Warhammer version, but it's unclear.
Posted by Tears of Envy at 16:23