Black hell - a vision for the Ravewing

Some things you just can't escape.

I've done a lot of work in smaller scales of late and I thought it was high time that I returned to the comfort of grim-dark 28mm.

I've always wanted to do a Ravenwing army. At least ever since Forge World sculptor Will Hayes destroyed me with his Dark Angel bikes at a tournament way back in about 2012. Well, Master Hayes, your time has come... 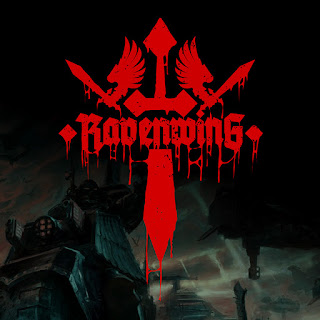 One of the things that's held me back is not really finding the 'edge' I want for them. Don't get me wrong; they've always been cool. But I've just not found a way into them that suited me. The artwork is inspiring, but I couldn't figure out how to translate it to miniature form. Then I remembered these guys:

Yep, that's right. The 'Black Skulls' from the topsy-turvy-black-metal-nightmare this is Mandy. LSD freaks who have very much slipped their leashes and who exist in a hallucinogenic padaemonium all of their own.

I began to imagine the Ravenwing less as mounted medieval knights and more as lone-wolf outriders. Elite huntsmen who spend great lengths of time in small bands way beyond the reach of civilisation. Much like the various American troops we meet in Apocalypse Now, each squad has gone a little bit bonkers, sliding into their own version of reality with the help of prolongued feral isolation, their obsession with finding their traitorous brothers and probably a fair few doses of obscura. And how would their contact with The Fallen affect them? I think the influence of the traitors will have rubbed off on them - they will be vicious and terrifying.

How is all this going to play out in miniature form? Well, for a start the vehicles are going to take on a rat bike aesthetic as they've been in the field for years. The Dark Angels robes will transform into ragged spec-ops ponchos and they're certainly not going to look like noble knights. They're going to be...spikey.

This being some sort of half-baked plan, that's all for now. I'm amassing the bitz I need to do this and I'm so glad I saved the six bikers from the old Dark Vengeance set of yore.

So that's me and the Cheddar Goblin signing off.
Posted by Tears of Envy at 18:31