The announcement of the return of The Old World came along at the same time as I was reading an article about the forest in the German psyche. To celebrate the former I thought it would be cool to organise a small Old World skirmish using the amazing Warcry rules set in one of the forests of The Empire.

But first, a word on forests...

Becoming the Forest zine is one of my favourite publications. Ostensibly a black metal zine, it includes articles on wider context and influence of forests. Issue 3 features a fascinating examination of the great German woodlands and how they have been viewed (and used) over the centuries by German politicians, writers and artists. The Romantic notion that the Germanic peasants personified the forest, and that these forest dwellers were in turn a taproot of sorts for wider German society struck a chord. The Old World is, of course, modelled to a great extent on medieval Germany. So, I began to imagine a low-fantasy encounter.

What if a Necromancer clawed his way out of a barrow in the Drakwald and raised the few corpses he could find? His small gaggle of lackeys would likely soon come across one of the many little hamlets buried deep in the woods. The locals would be decimated, with a single messenger escaping to report the tidings to the local Burgomeister. A crack team (perhaps a lance) of State Troops is sent to investigate. They would arrive to find the village eerily quiet. Settling down for the night in an abandoned inn, all hell would brake loose at midnight. A tiny siege would ensue - a kind of Seven Samurai standoff meets Dog Soldiers. Thatched rooves would burn, chickens would run about as the plucky humans discover they've bitten off far more than they can chew.

This scenario is an excuse for me to start a new project, play a game and take some nice photos. I may even design a new card deck to go with it. But more on that if it happens.

For inspiration I've collected together a bunch of images (many crops of larger works) evoking the kind of feeling I'm after. I quite like the aspect of the Warhammer Old World that emerged in the late 80s - a rich, bucolic landscape, verdant and picturesque but with danger and weirdness lurking just below the surface. Quite related to the folk horror trend that is all the rage in 2019. The late 80s work of John Blanche is certainly a big inspiration here, as well as the paintings of Ilya Repin, Vsevolod Ivanov and Pavel Ryzhenko. 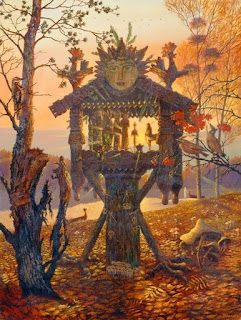 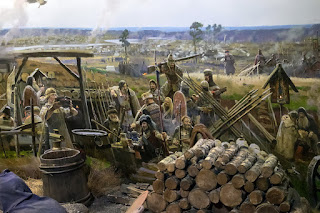 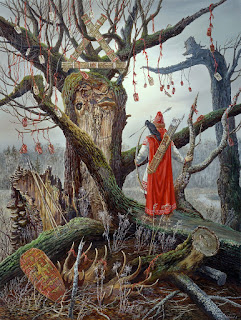 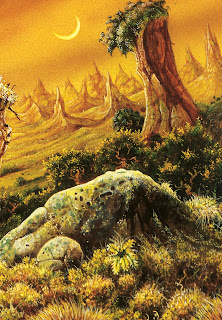 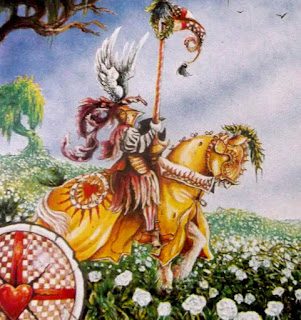