As I mentioned a while back I've been working on some play aids for the forthcoming Mordheim MMXIX game. After much tinkering about (and cursing) in InDesign they are finally done! 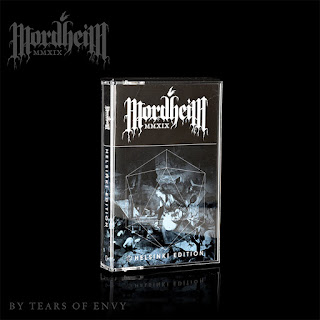 Because I'll be travelling to Helsinki (via Essex, London then Stockholm) I wanted to keep the play aids compact. This led me to read a bit about 'micro games'. A rather nebulous term, but it often applies to small-form-factor (SFF) games. These were all the rage in the early 80s thanks, in part, to examples made by companies like Dwarfstar Games. They were popular partly because they were very inexpensive to manufacture and were sold cheaply. And partly because with names like Barbarian Prince why wouldn't a 13 year old boy want them? They often contained a flimsy booklet, some card chits and sometimes a map all shipped in a small polythene bag or a single-tuck-end box. Of course the genre continues today with lots of SFF games on the market, but its those early ones that capture my attention.

It's the barbarians. Probably.

And they were small. Really small. But with this SFF inspiration, what form was my play aid pack going to take?

My hunt for a format fortuitously coincided with my delving into Dungeonsynth (often abbreviated as DS or BMDS, meaning 'black metal dungeon synth', not to be confused by BDSM...) This is a musical genre born in the early 90s experiencing a resurgence at the moment thanks to platforms like Bandcamp. I'm not going to go into details here (it really deserves its own post) other than to say that much of the music is sold on cassettes. Yes, you read that right. And it has its own 'look' which is inspired a lot by Games Workshop's vintage illustrations. So you get some really amazing cassettes replete with awesome lo-fi fantasy artwork on the J-cards.

So, I thought, could I get my play aids to fit into a tape case? Hell yes I could. Here's how: 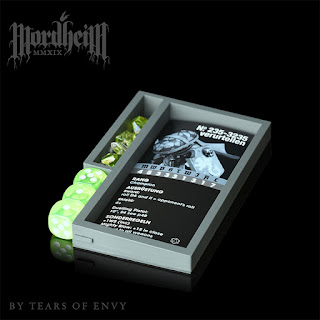 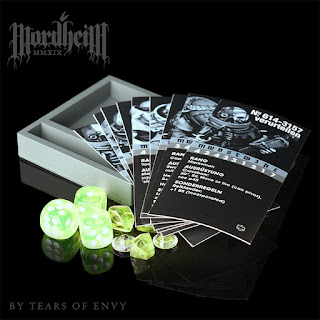 I designed and 3D sculpted an insert which would sit in a cassette case and hold a few cards, three dice and some tokens. A friend very kindly 3D printed this for me. And by golly! It worked pretty well. The tape case just required the spindle pins sawing off and the insert slips happily into the case to hold all the components (with the addition of a plasticard back). 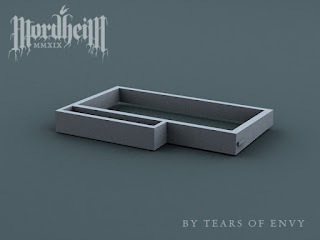 Render of the insert 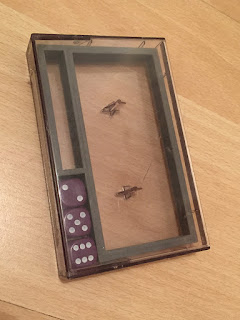 The 3D print in situ, showing how the dice are accommodated. The piece needs a plasticard back.
Small tokens cen be kept in the secondary slot.

But what were all the components going to look like? I was keen not to just do a 'cookie cutter' BMDS design. While this might be cute, it would also, I felt, be a bit literal and pedestrian. Of course we already had the black-metal-inspired Mordhehim MMXIX logo so this would play a part. And I wanted to do some worldbuilding to enrich the background of my time travelling gang of convicts. I settled on a dose of dystopian post-war Modernism / Swiss style graphic design. I'll go more into the reasoning behind this and how it ties into their world in a future post. But one of the advantages is that its very legible on these rather tiny cards. 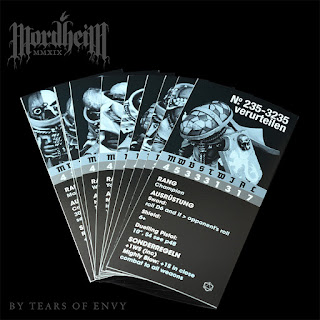 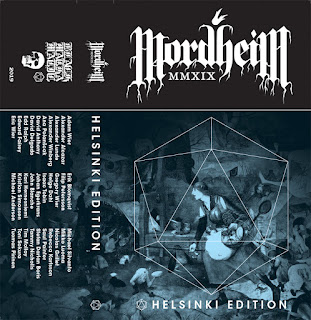 The J-card layout on its own. It looks a bit grey here as it's in CMYK format. 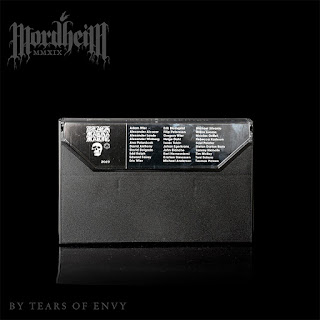 The back of the case


I'm pretty chuffed with this little package and I might end up doing more tape cases for future games. I really like the idea of having a stack of tape boxes, each case with its own artwork and logos. And one will definitely have to feature barbarians.
Posted by Tears of Envy at 19:11

Time for some more Epic

I finished the remaining four Marines to complete my Space Crusade-inspired squad for my micro-40K project. Here they are in all their ruddy glory: 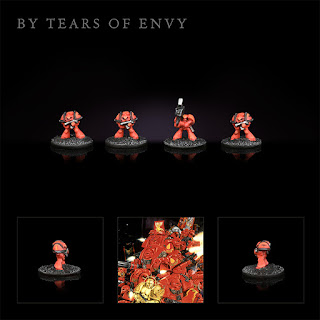 Here we see them on patrol suddenly feeling a bit inferior next to a looming beetle-back Warlord. This shot was fun to do and readers as old as me will notice the original Adeptus Titanicus box cover in the background. 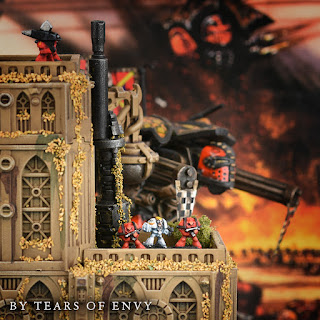 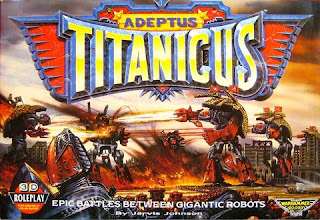 Below is a better shot of the little display case I've put together for all my 6mm chaps. The stuff at the bottom is thin magnetic sheeting (typically seen on fridge magnets). The washer-bases stick to with just the right amount of force. So you can actually be all sorts of clumsy around this and the minis will stay put. Yet they pop off with little effort. Handy. 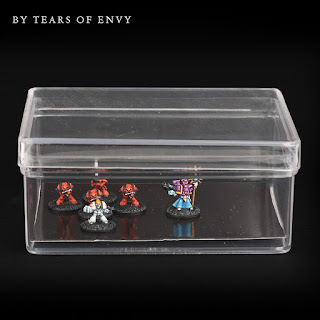 I want to carry on with the Space Crusade randomness of this diminutive project. But I also kind of want a 2nd edition army in Epic scale. Argh! Too many hobby projects...
Posted by Tears of Envy at 18:25

A short post to show off this little chap. He'll bulk out my rather small band of heroes for my Krawl project. They sure as hell need some help, as the baddies are really racking up in number!

I wanted him to be a 'tooled-up' Aelfen adventurer, replete with all manner of gear. I think the kitbash worked out pretty well on that front. He's got a satisfying balance of clobber without it being ridiculous. Big thanks to the excellent Steve Buddle who kindly downed his digital miniature-making tools for enough time to sculpt the little fur collar on this fellow. It was an awkward join and needed a bit of 'something' to cover it up.

Steve did a great job. So now he can go back to making miniatures professionally. 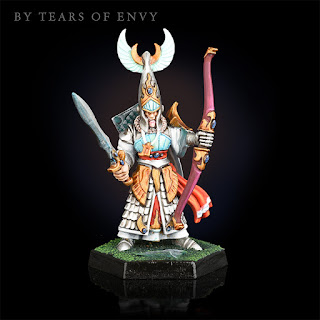 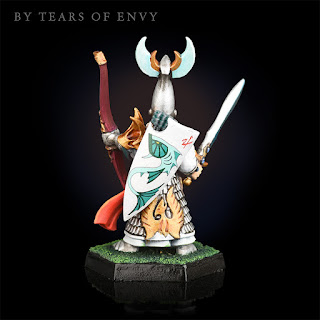