I was inspired by the recent release of the Beasts of Chaos Battletome and painted up a trio of minis too add to my Krawl project collection. Here they are in all their cloven-hoofed glory: 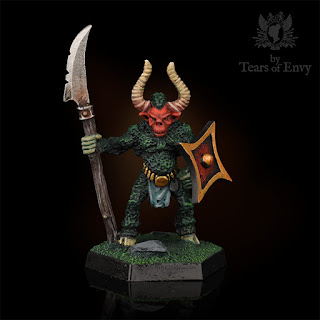 The chap above needs no introduction as he's a fairly common classic Oldhammer sculpt from the late 80s. Giving him a red face and green fur lends him a slight Masters of the Universe vibe which I love. I painted his shield separately and stippled the red onto it using sponges to give it some interesting texture. The hue of his face actually blends up into his horns, which is a nod to the incredible work of Don Hans whose minis I find a constant source of inspiration. 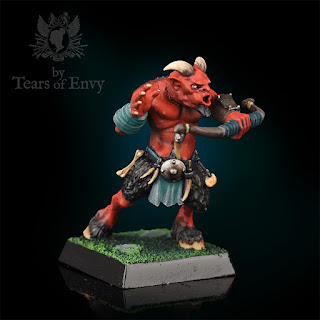 The next little guy is a diminutive Ungor - these lighter troops are used as skirmishers in Beastmen armies. I love the medieval vibe of the Ungor designs. They look like they have stepped out of a Bruegel painting. I ramped up his daemonic footsoldier vibe by painting his flesh red and I was pretty pleased how it turned out. I sprayed him black then zenith sprayed him white, before spraying him red all over. This helps to make the red a bit brighter and forces the shading a little. 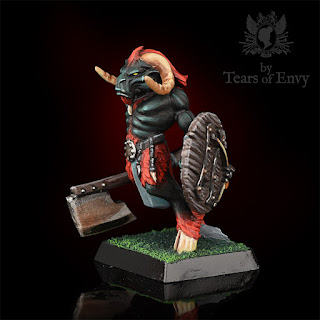 The black/green flesh on this guy was a response to the Ungor above - if the Ungor was red, it seemed appropriate to make their larger cousins darker and more ominous. On this guy I really tried to go for a more zenithial style of highlighting (which I'll talk more about in a future post) and it worked OK. I actually developed my technique after I finished him, but he is an early success I feel. I kept the wood of his shield rather neutral deliberately so as not to detract from the brighter hues elsewhere. The lightest feature is his horns, which helps to draw the viewer's eye up to his head.

One last thing to say is that I'm developing a palette for my Krawl miniatures. I mentioned this a while back, but it's inspired by the Bitmap Brothers video games of old, Cadaver in particular. The green-shaded-grey acts as a 'signature colour' and the other tones are varied but with commonality between them (the reds are broadly the same, for example).

I love the Spawn kits with all their wibbly options. I intend to add a trio of these degenerates to my Night Lords army. I got them all to a certain stage of prep, then rushed ahead and completed this guy. 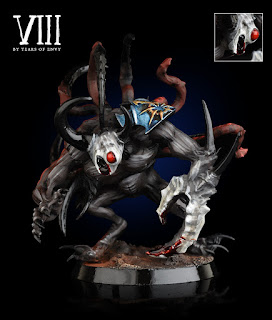 After his black undercoat I hit him with Mephiston Red spray from one side. This did much of the complex blending for me, and I highlighted him up from there. I added a tiny bit of armour plating to each's shoulder. This allowed me to apply the distinctive Night Lords metallic blue which defines the collection. The red Blood For The Blood God really added a bit of 'pop' at the last stage as it vibrates against the blue.

You can take Spawn as part of the Chaos Cultist Necromunda gang (the rules for which were printed in White Dwarf a while back). So he's double the fun (which is totally an expression which needs to be used in conjunction with Spawn).

Dungeons? In Age of Sigmar? This must be...

I've been really enjoying building up a collection of Citadel fantasy 'randoms' (for want of a better term). Odds and sods from the history of Games Workshop, from classic Oldhammer lead minis to some of the beautiful plastics now available. I just choose what I like. And it turns out what I like are little 'grunts' - just rank and file guys. Few are heroes, most are just characterful fellows representing the archetypes of their race or faction. Some are converted, many are not.

But I wanted a structure to what was clearly becoming serious collection. And I love branding. And the dungeoncrawl genre. And card floorplans. So when you mix it all together you get this: 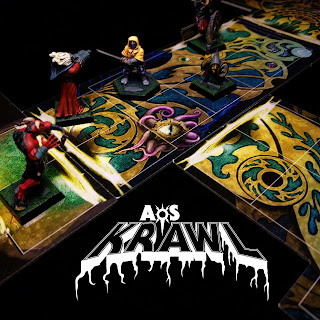 The thing I like about the dungeoncrawl genre is that it doesn't rely on multiples of miniatures. Finding a grot, a tzaangor and an ogor in a room in a dungeon is just fine, thank you (though goodness knows what they were doing there before you kicked down the door...). Games Workshop has explored the genre a little with their Warhammer Quest series of games and in doing so produced some excellent floorplans. While I own and treasure the Silver Tower set, sadly I don't own the Hammerhal ones. As long-time readers will know, I also have an extensive archive of Oldhammer floorplans dating from the late 80s. 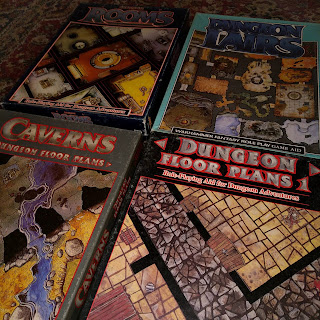 So, AoS_Krawl is about...
How am I going to achieve the last of these aims? Krawl isn't wedded to any particular system. In the same way as its genetic material is a hybrid of old and new, I suspect any rules I employ will be a fusion. Heck, I might even be tempted to dig out my old Combat Cards and work with them (which, incidentally, have been rebooted for 40K). Let me get back to you on this.

Here are some alternate modes to try:
Fancy some music to accompany your delvings? Check out Heimat der Katastrophe, pioneers of 'dungeon-drone'.
Great dungeoncrawl movies to check out are:
Big Trouble in Little China
Labyrinth
Indiana Jones
Goonies
At the Earth's Core
Lord of the Rings (the 1978 version, obviously)

The Mummy (1999)
Trapdoor (the 80s kids claymation series, which is surprisingly good and hilarious to boot)
I was going to recommend 80s classic Knightmare, them I re-watched bits on YouTube and remembered it was bobbins.

Wow. That's a lot. Please have a go at Krawl yourself as a framework to justify collecting and painting all those fantasy randoms you love. Let me know in the comments how you get on.
Posted by Tears of Envy at 20:09