I finished a trio of Cultists for my Night Lords. These chaps join the quintet I completed a few months back. I'm kinda regretting the blue shaded black. It looks lovely but it's proving quite laborious to roll out over so many minis. Lesson learned about considering workload if I intend to paint a whole army.

I think I have another three to go before I'll call it done. This forthcoming batch include the leader, who I'm rather looking forward to lavishing a bit more attention on.

Of note is the photography. I'm pleased with the result but I need to refine the process a bit as the minis are currently proving quite laborious to clip out. The gloss black bases and gloss surface look really nice and lend even these fairly basic paint jobs a touch of class.

Remember these guys? Me neither, apparently.

Turns out I'd criminally forgotten to post my squad of Warlocks. I must have finished them a couple of years ago and they've had a few outings on the tabletop.

I'm quite disappointed by my choice of colours for them. I feel I applied the principle that they sport the colourway of the Craftworld too rigidly (in this case, a very early Rogue Trader-era scheme). This has left them rather dull I feel. When these sculpts first appeared, the Studio Eldar army was a gloriously multi-coloured affair. Not only did each of the Aspects having its own colourway, each individual Warlock sported different livery. This gave them a sense of being special as befits their background. If I do a second unit I'll go down that road I think.

Craftworld overly-Greyjoy.
Posted by Tears of Envy at 20:51

No, me neither. This guy was very much an experiment in both colourway and painting technique. I wanted to see if I could knock something out quickly and I'm fairly pleased with the result. Clearly the spatter was a a big part of this, done with Citadel Shades and a tooth brush. The colours are based on a submarine interior. Clearly this chap has had some contact with humankind as he's sporting an Arabic numeral. This gives him a 'Maschinen Krieger' feel.

Not sure if I'd do more T'au, but I'm thinking of varying my Blood Angels a bit by adding some Angels Encarmine Death Company, who invert the scheme to be red crosses over a white base. 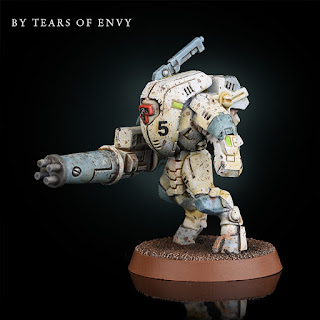 The crazy world of Giger knock-offs

Let’s face it, even if you don’t like or appreciate his work, Giger had an immeasurable effect on many different creative forms. His uncanny, gothic, necrophiliac finger prints can be felt to this day in films, comics, sci-fi and horror art. His most famous creation, the ‘big guy’ from Ridley Scott’s Alien, has entered the cannon of horror archetypes, alongside Karloff’s Frankenstein and Lugosi’s Dracula. The alien has even solidified into stone, and graces this cathedral as a gargoyle.

Sometimes these derivative works are quite good. Most of the time, not so much. But there is a breed of lurid, psychedelic, technicolour Giger-inspired design that emerged in 90s video games which is close to my heart. What follows is a whistle stop tour of some of the greats. I going to forgo individual commentaries and just discuss what they have in common.

Clumsy handling of the bio-mechanical aesthetic is one shared attribute. But I love the way Giger’s subtle, transparent necrotic flesh is reinterpreted (badly) as lumpy airbrush forms. His fine arterial-like pipework becomes chubby vacuum hoses that cling awkwardly to surfaces. His voluptuous, almost-human mouths with ever-so-slightly enlarged canine teeth become goofy maws filled with fangs that would make a deep sea fish jealous. But the 90s was an era of hope after the po-faced nuclear despair and depression that dogged the 80s. And the decade’s optimism can be detected in video games, which, with the dawn of the 16-bit era, now had enough pixels and colours to actually represent what customers saw on the box art. Thus, titles like Alien Storm brought you face to face with knock-off Giger baddies to blast away.

Kudos needs to go to blogger Why I'm Not An Artist, who had the exact same idea for this post two years ago. And Bloody Disgusting. But by the time I found their pieces I'd written this, so I figured I'd publish and be damned anyway. 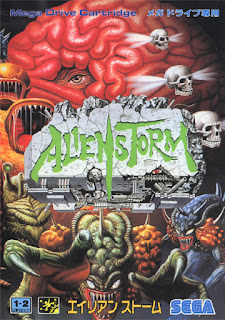 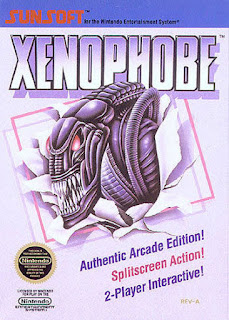 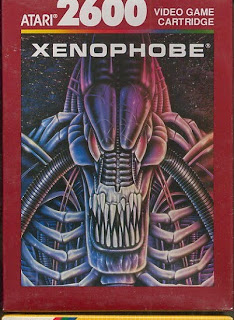 Xenophobe, a bit earlier than the era I'm concerned with, but the artwork is so 'great' I couldn't resist including it. 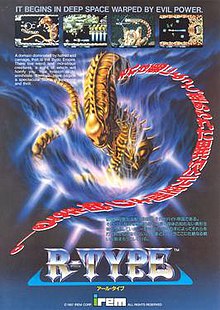 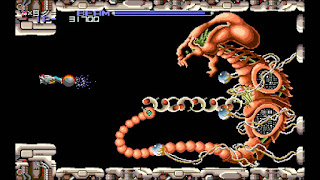 R-Type didn't even have the decency to even try with their advertising - the artist just drew an alien and figured that was fine. 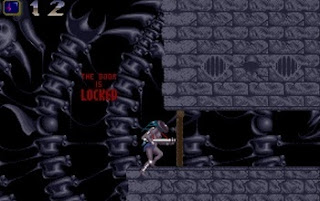 Shadow of the Beast creators Psygnosis enlisted Roger Dean to create their box art and gave us some Giger homages in a couple of their levels. 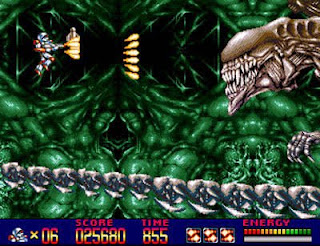 Turrican's boss looks familiar, in a clumsy way. Kind of like a puppy. With too many teeth. 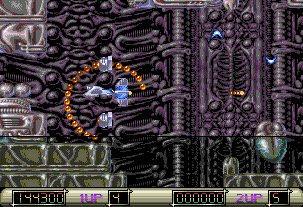 Z-Out didn't want to be left behind so channelled some Giger love. Consonant-[shortword] was clearly a popular name choice thanks to R-Type. 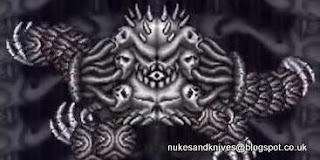 Contra III also got in on the biomechanics action. 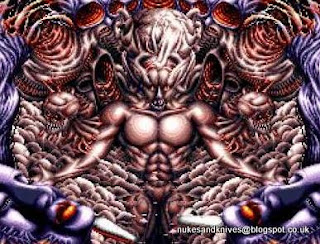 Devil Crash even managed to get some Giger into a pinball game.