As a symptom of my obsession with the 1970s I'm starting to collect Nikon cameras from that period. I think I'm going to end up like Dennis Hopper from Apocalypse Now. 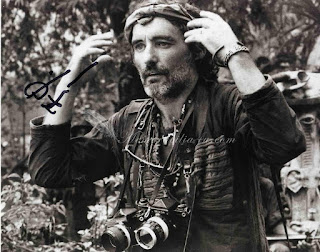 Or as Raoul Duke's ill-fated photographer Lacerda from Fear and Loathing in Las Vegas. 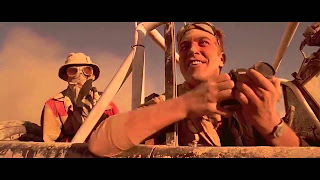 Both of whom carry Nikons. 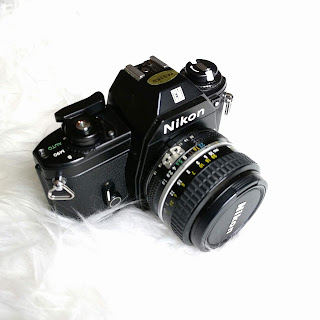 Nikon dominated the pro camera market in the late 20th century thanks to their rugged builds and comprehensive mostly-backwards-compatible lens system. Alas it's only in the 21st century that poor Nikon has rather lost the lead. Canon took over as the pro's favourite thanks to superior autofocus and lens quality.

Despite their market dominance, Nikon made a bit of a miss-step in the late 70s too with the poor little EM. Nikon Corporation was revealed to be a bunch of inept patriarchs with their rather misguided attempt to market a camera to women. They believed women were too stupid to understand the complexities of manual SLR photography so they developed a cheap camera body which dispensed with... well, choice. And because women love it when you remove their ability to choose, we quickly sussed the EM was a rubbish option and sales were low. The model was discontinued after only three years. 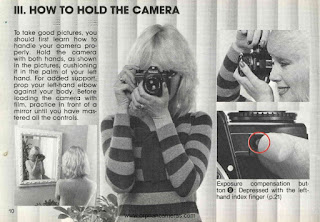 Don't forget to practice in front of a mirror, girls! The EM manual.

The EM is an aperture-priority-only camera. It has no speed dial. The internal light meter is used to tell you, you stupid woman, what shutter speed you should have selected, had you been given the choice. It does, however, give you a 'B' (bulb) option and a mechanically controlled 1/90s option if you were blonde enough to let the batteries die. For those freaks-of-nature of womankind who can comprehend such things, it also offers limited control with a -2 exposure compensation button. But careful ladies, overuse of this could be dangerous. Probably best to concentrate on kittens and children.

You can, in fact, 'fool' the camera into more subtle exposure compensation by adjusting the ISO dial on the fly. Ha ha! Take that, Nikon!

Good question. Well, a couple of reasons. Today these cameras are dead cheap (mine was £25 in mint condition) and it's a nice addition to my 1970s collection. With its f-mount any of Nikon's top quality lenses can be used so you'll get really nice results. Also, while the build quality was inferior in the 70s, that was the era when They Made Things Properly. In the words of Ash from Alien, the EM is actually a 'tough little son of a bitch' by today's standards. Sure, not as rugged as my FM, but sturdy nonetheless (although the rewind crank on mine seems a bit weak). It's also a bit smaller and a lot lighter than my FM. So I'm going to chuck it in my travel bag safe in the knowledge that if it gets lost/stolen/dropped (or, as a woman, I just forget it while I'm thinking about dresses) then it's no big deal.

I'll post some photos. In about a year when I've taken them, had them developed, then had the time to scan in the negs.