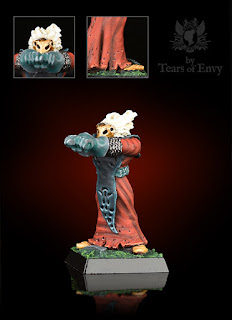 I love painting random single fantasy minis as a break from the units I paint for my armies. As a result I have a growing collection of Age of Sigmar, Warhammer and even Lord of the Rings randoms. I prepped this guy as part of my aborted Oldhammer-Mordheim warband so he was towards the front of the 'fun queue'. Don't ask what's at the back.

He's one of the Citadel Chaos Sorcerers, probably sculpted by Jes Goodwin. He goes by the moniker of Jezekal Iron Face in the 1991 'Red Catalogue'. I can't help thinking his surname is a bit disappointing after a forename like that. And he's clearly miming to some 70s disco tune. I wish he wouldn't because his disco gloves being in front of his face make him a pain to photograph.

I initially thought about adding sigils or a pattern to his robe. But I was pleased with the highlights on the tiny tears in his dress, so decided to leave it be. These little moth holes are somewhat of a trademark of Jes' sculpts of the era. They add a nice bit of interest to what could be a large, flat area I think.

I'm talking to Operation Asgard at the moment to see if we can get a low-model count fantasy game arranged. It might have some interesting background. And that background might be a bit bonkers.
Posted by Tears of Envy at 22:53