Why Hellraiser is rubbish

"Wait!" I hear horror fans cry, "It's one of the best and most original films of the genre!" And you are correct. Except I'm talking about the franchise. The first movie is awesome, but most (if not all) of the nine sequels have failed to live up to the original. How can you make nine movies in such a way that none are great? Here's how...

Greed. That's how. Which is appropriate given the nature of the Cenobites - dimension-hopping murder-bastards who prey on the lustful and sinful. It transpires that Dimension Films got their mitts on the license some time in the late 80s or early 90s, after the first sequel. Yes, folks, that's Mr Harvey Weinstein's company. To be fair (and put fashionable Weinstein-bashing aside) Disney owned Dimension whet it picked up the rights in the late 80s and made six of the sequels. Then Dimesnion was sold to The Weinstein company in 2005, who made a further two sequels.

To retain the rights the owners have had to keep 'exploiting' them. No, this is not a lust-demon pun but the actual term used when a licensee has to keep 'doing stuff' with an IP in order to retain the rights they have. If they let their rights fall fallow by not doing stuff then the rights revert to the original owner. Failure to exploit is why Kenner/Hasbro made the most epic fail of losing the Star Wars license in the late 80s. The need to keep exploiting is why, until 2015, Sony kept making lacklustre Spiderman movies. So Dimension, under two owners, has been pumping out low-budget movies for the last thirty years in order to retain their rights.

I should, at this point, say I've got a lot of sympathy for the creatives behind these movies. I've just watched the 2018 Hellraiser Judgment [sic] and it's not great, but it's also not that bad. The team is doing the best they can with IP they clearly love. But with no budget and no marketing support. And if you think that's bad just imagine the added pressure of Mr Weinstein descending on you if you mess it up.

The reason I'm writing this piece is because the IP has such potential. It's a shame to see it exploited in both senses of the term. Watching Judgment got me thinking about the influence of the first movie, and how awesome some of the spiritual-successors to the original are. Here are some of the best: 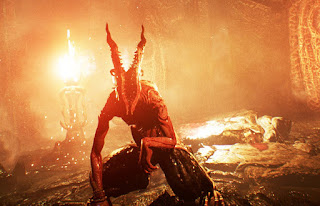 Agony is a video game I've been watching for a while and it went to full release earlier this year. It takes the player into a full-on body-horror vision of hell, and pulls no punches with some bonkers creature design. How awesome would it be if Hellraiser did that? Turns out I'm not the first person to think of this. Hellraiser: Origins was an indie project that tried to reboot the series with a grand scope but, alas, never got off the ground. 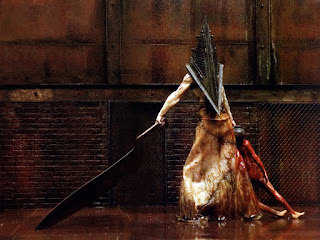 I'm a big fan of Silent Hill in all its guises. While its visual influences are rather more diverse than Hellraiser, it draws on the underpinnings of the 80s classic. Imaginatively-named 'Pyramid Head' (shown above) appears as an enigmatic (if less loquacious) exuctioner in the vein of Pinhead. Perhaps it's time for Hellraiser to ditch the comedy-body-horror-fetish tropes it's fallen into (I'm looking at you, here, Mr 'CD Head' from Hellraiser: Hell on Earth) and hire a art director as inspiring as Masahiro Ito (who did the original creature concepts for Silent Hill) or Patrick Tatopoulos (who worked on the movie). 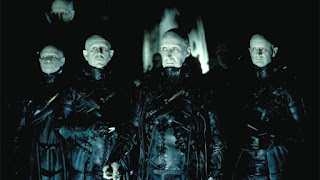 Alex Proyas' 1998 Dark City features antagonists who are clearly heavily inspired by the Cenobites. What I really like about this movie is the twist you discover mid-way through. Without spoilering it for you, it would be great if such a mind-bending cosmology were injected into Hellraiser. Sequels and comics have indeed given a slightly garbled backstory to the Cenobites, but something more surreal, menacing and down-right inspired would do the IP justice.

Wish-listing aside, it looks like the Hellraiser franchise may be in for a period of change, for good or for ill. With the declaration of bankruptcy by the Weinstein Company in February this year Lantern Capital emerged as the winner of the studio's bankruptcy auction. It remains to be seen what happens to Hellraiser. Sometimes the sale of a company triggers clauses in a license where the licensee's rights revert to owners, but given this seemed not to happen when Disney sold Dimension to The Weinstein Company that doesn't look likely. Lantern may choose to break-up and sell on the assets, so who knows where Dimension may end up. 80s geek IP is big business at the moment, with companies like Paradox gobbling up IPs like White Wolf (with their World of Darkness IPs) and more recently Harebrained Schemes (including the BattleTech IP). Even Freddie is back in 2018 with a new movie Nightmare: Return to Elm Street. Here's hoping the eventual owner sees fit to do something with the IP rather than just exploiting it in every sense of the term.

Further reading:
A Very Brief History of the Hellraiser Franchise
How we made Hellraiser
12 Sharp Facts About Hellraiser
Posted by Tears of Envy at 21:57