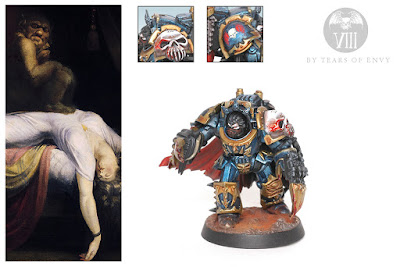 I've had a hankering to do some Chaos Space Marines for some time, and the imminent return of Kill Team is a great reason to start small, and build from there.

I chose Night Lords. I've been reading the Dembsi-Bowden novels and I can't recommend them highly enough. They are a wonderful source of inspiration and a fascinating portrait of a Legion descending into heresy (they admittedly start on some pretty shaky ground). As a First Founding Legion they also give you the opportunity to mix in Heresy plate, and the Night Lords' colourway remains pretty consistent pre and post Heresy. They feel very '40K' with their 80s-heavy-metal aesthetic of skulls, bat wings and lightning. Plus they'll make a nice contrast to my more heraldic, red-or-bled Blood Angels, who are the antagonists in one of the novels.

Full of excitement, my first step is to do lots of visual research. I try to find examples of great paint schemes for that army and look for new twists I can put on the subject. You can see the results below. I also talk to anyone who collects that army, and Mr Will Hayes from Forge World was very gracious to tell me about his beautiful Night Lords collection. 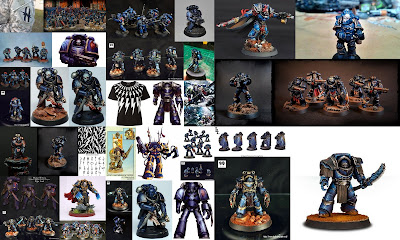 The next step is colour tests. The Citadel push-fit CSMs are great for this, they require very little build time. I'm always keen to try as many techniques as possible at this stage and 'go wide' in my experiments. I'll vary washes, choose different colour mixes and try to cover as many bases as possible (pun intended). I write down which paints I used for future reference. Here are the three resulting miniatures. 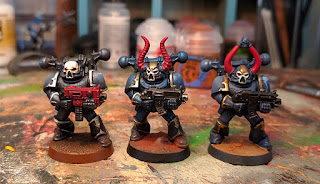 One of the challenges with Night Lords is to avoid them becoming too garish. The lightning pattern can be quite distracting so I was keen to keep this subtle. Hence it has become something more akin to a crackle texture rather than very obvious graffiti (besides, some of the lore implies the lightning is not simply a design painted on to their armour, but a reactive substrate that 'crackles'). I experimented with making it more of a graphic pattern too. This worked OK but would need to be knocked-back a lot I feel. I think using it sparingly on infiltrators would be cool. Plus I'm fond of camouflaged tanks for Marines, so if I ever get around to doing a vehicle it could become the machine's camo pattern.

In the end I plumped for the paint recipe of the guy in the middle with a few variations. I feel his red horns are a little too bright. 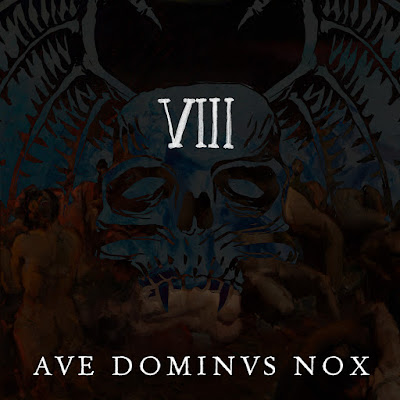 The camouflage of consumption

This is a story of things being hidden, then revealed, only to be hidden again.

I'm fascinated by camouflage and its varied forms, from natural occurrences to anti-recognition technology. Over the past decade I had noticed the (literal) rise of massive warehouses in the British countryside, often coated in gradated cladding that mimicks the sky or dappled to blend in to the landscape. This post has been prompted by a great article which delves into the recent history of these structures. I want to explore the camouflage aspect which the author touches on a little more. 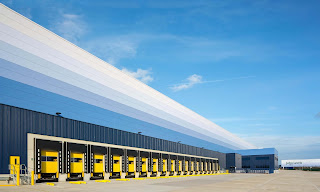 The structures in question are distribution centres. They serve our modern desire to Have It Now. They act as massive centralised storage depos for goods which are bought online or sent 'just in time' to stores that are now smaller due to rising rents and failing town centres. In his article Rowan Moore explores the way that these 'sheds', as he calls them, are the internet made manifest. In our attempt to strip down our lives and apply Lean methods to our domestics we have outsourced the storage to corporations. In turn these businesses have, some might say, 'infiltrated' our countryside with their sheds. They are the internet made manifest. Code given physical form.

His article is wide-ranging and touches on the 'synthetic' camouflage applied to their exteriors.  There is a cycle at work here. The invisible ones and zeroes of our digital lives are coalescing into giant Minecraft-esque cubes, which designers then try to conceal by blurring the giant boxes into the landscape using visual crypsis. In the same way as a moth uses camouflage to extend the cycle of life, the sheds are doing the same (in their case death comes from protesters who will frustrate planning permissions). I am also reminded of Plato's Cave. In The Republic the philosopher asks us to imagine a cave in which prisoners are shackled facing a blank wall. Objects are paraded out of their vision so that the items' shadows fall into the wall thanks to the light of a fire. The prisoners' reality is that of these blurry shadows. They have no knowledge of the real objects, or the world outside. The giant blurry boxes lurking in our countryside, softened by their digitally designed camouflage, are the shadows of our own rampant consumerism. 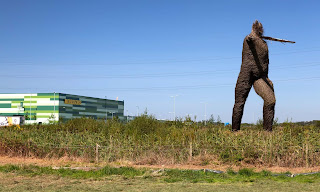 I was struck by their resemblance of these distribution centres to the work of sci-fi artists in the 70s and particularly the work of Colin Hay. The vogue of the era was to paint enormous structures composed of Brutalist angles coated with exotic camouflage or decoration. While contemporaries like Chris Foss opted for more garish, industrial paint schemes (often featuring the hazard warning combination of black and yellow), Hay explores more sombre tones harking back to Luftwaffe camouflage. His sea-green and duck-egg-blue architecture looms out of the landscapes in which they sit, much as the Morrisons’ Bridgwater centre emerges from the Somerset hills. 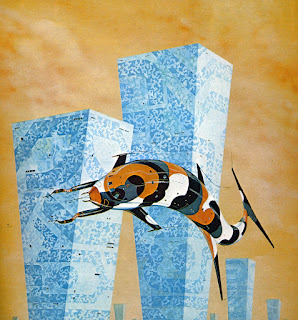 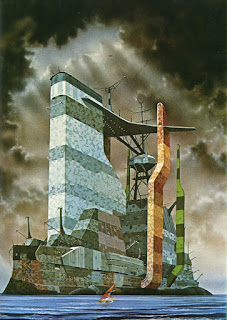 As someone who spends a lot of time in the (grim dark) future, I am prompted to ask myself; what can we expect the future to hold for these sheds? How might camouflage be involved?

Perhaps anxieties over planning permission will force these sheds to become mobile? As vast, peripatetic structures, they might resemble something between the 'wagon trains' of Patrick Tilley's The Amtrak Wars and the 'walking cities' imagined by architect Ron Herron in the 1960s. Their camouflage could veer away from visual crypsis, to mimesis or, if their pace were quick enough, motion dazzle. As a mimetic structure they could be made to resemble the giant saurians of the Mesozoic era - vast, thick-legged beasts with long, craning necks. Were the death toll from fear-induced heart attacks too great, designers could paint them in zebra-like motion dazzle. Viewers would never be quite sure if the sheds were approaching, or receding. Or coming back for another strafing run of Amazon deliveries. 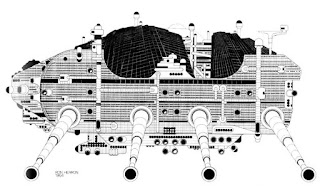 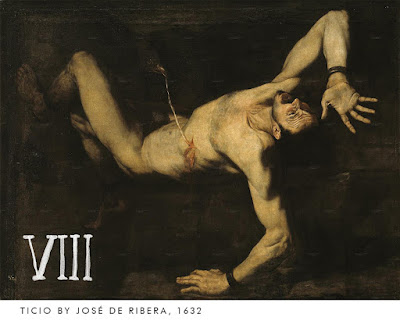 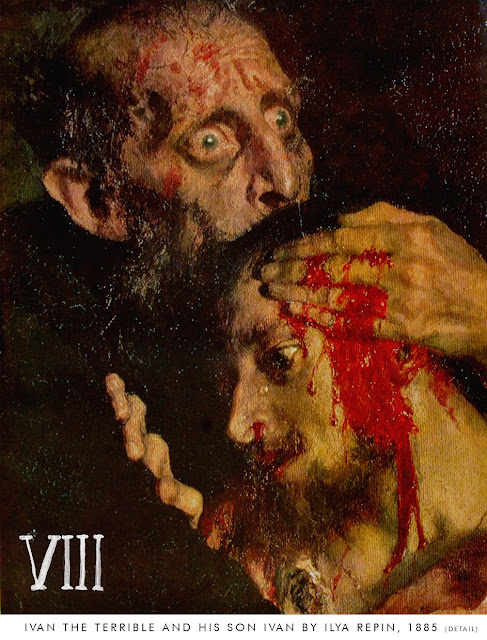 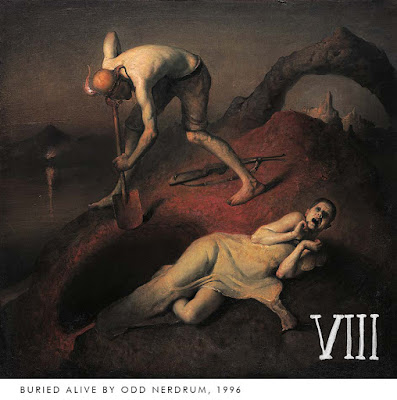