Just shut up and do it

I recently realised that I had got into a bad cycle of procrastination when it came to painting miniatures. And I blame it all on you.

The blogosphere is great for our hobby but it does rather raise the bar on quality. No doubt you lovely people like to come here to look at all my shiny toys and I thank you all for your kind praise. I can also tell you that working in an environment saturated with amazing paint jobs reinforces the feeling that only the best is good enough. I had a moment of realisation when I caught myself thinking that I couldn't possibly find time to paint a faction for Shadespire. Now, at its best that's only three miniatures (I'm looking at you here, Mr Steelheart). Which is pretty lame on my part. So I decided to just shut up and do it.

The solution was simple; to regard the time invested as a more important part of the equation. The faster I can paint the more I would see that as a 'win' on a par with quality.

So let me introduce Garrek's Reavers:

I've previously mentioned Mark Bedford's painting tips. I plundered these mercilessly when it came to Garrek and Chums. Start over a black undercoat, then zenith red spray followed by airbrushing the skin blue then white. 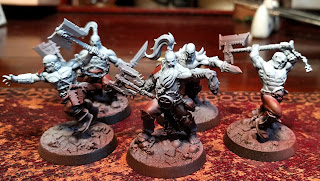 Garrek and Chums after the spray and airbrush stages.

Block in the details, a few highlights and washes on selected areas and then lots of BLOOD!

Most notably, beyond the spraying and airbrushing I didn't do any further highlights to the flesh or cloth. Creating a little stand so your minis can sit over a radiator is a good tip too just to shorten drying times. Everyone has their own rust technique and mine is: wash Skrag Brown thinned with lots of Lahmian Medium over a black basecoat, then drybrush with Ironbreaker and then sponge-on Stormhost Silver. Pretty quick but really effective.

Most importantly I found I really enjoyed painting Garrek and Chums. The sense of achievement at seeing these guys go from plastic to done in one weekend was really rewarding. I feel like I can 'crack on' with quite a few projects that have been sitting around.
Posted by Tears of Envy at 21:10

I've been meaning to post these guys for a while and was holding off until I did another photo session. With a house move looming, I've just packed away my photography kit. With it stowed, I resorted to a quick and dirty shot of these chaps, otherwise it'll be ages before they get any air-time.

They are the second half of my Heresy-era squad, and are, consequently, not the most exciting guys. The notable exception is the Sergeant, who has some rather natty custom decal work going on on his Power Fist. I need to get a better shot of that at some point. While the others sport my custom Heresy-era decals in black, Mr Big Hat required something special, so he got two of the gold Blood Angel decals from the new Dark Millennium boxed set transfer sheet. It was only later I learned the new(ish) Forge World decal sheet has gold Heresy decals. Damn.

Fun fact; the Dark Millennium boxed set transfer sheet was one of the last things I worked on while in the GW studio. I often ended up with a bit of space here and there, particularly on the right of the sheet. I worked with the 'Eavy Metal guys to come up with cool extras that could give customers options and add flavour to the Primaris minis. The Space Wolf runes are an example of these and were great fun to do. 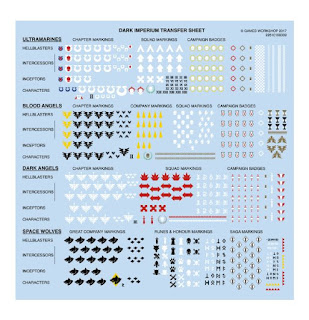