"It's mine, for better or worse." says the softly spoken Barker in this interview from 1987. He is answering a question from an earnest interviewer about the vision of psycho-sexual horrors he conjured up in Hellraiser, released earlier that year.

The interview, below, is a fascinating watch for several reasons. It's a window into the mindset not only of Barker (a floppy-haired, charismatic man who looks a decade younger than he was when this was shot) but also the British public. An audience of very 80s Scottish youths grill the film maker on his 'obsession' with violence and his contribution to the media boogie man of the day - the 'video nasty'. This was a term invented by the press earlier that decade to describe extreme horror movies that were circulating as video tape became a household media. Hellraiser was lumped-in to this category with the likes of Cannibal Ferox and Barker eloquently describes why he feels this is unfair.

Today these questions seems trivial. We live in a world where google will show you anything you want, from real life piranha victims to (probably fake) creepy pasta stories about Russian sleep deprivation experiments. We are in an age of deregulation and and we accept the state having little control over such content.

Another thing of interest is Barker's critique of building figures of horror into anti-heroes. He cites Freddy from Nightmare on Elm Street and argues that make Freddie a joker rooted for by the viewing public is damaging. Little did he know that his creation Pinhead would, arguably, become a similar icon. Thanks to Barker's masterful work, Pinhead grew into a spiky poster-boy for the early 90s alt/metal/horror scene. The (pretty abysmal) Hellraiser III even lurched into horror-comedy territory. Hell, I've even got a replica puzzle box in my spare room. I should get a replica Freddie glove to put next to it, just to annoy Barker.

So take a pew and watch this window into the late 80s. In the words of Pinhead, "We have such sights to show you."

Having cut their teeth fighting toothy bio constructs, my oldskool Harlequins were eager to find new opponents. Hence they jumped at the chance to fight some oldskool Craftworld Eldar owned by the (in)famous Phil Kelly. After a quick trip to Bugman's, Phil and I lined up what must be a couple of kilos of 25 year-old lead and prepared for carnage! 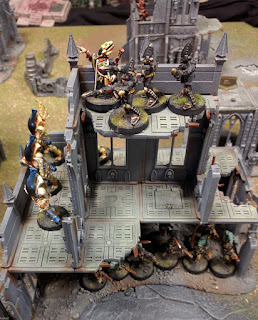 Phil's boney Ulthwé Eldar in all their glory

Before anyone in dance pyjamas hit the ground, I unloaded my special Harlequin dice. Surely these sparkly blighters would do me proud? 'Course they will, old son... 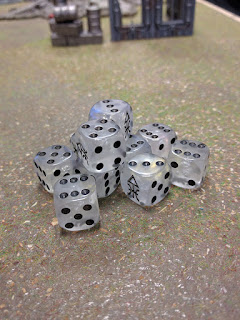 Deployment was a tasty affair as we were fighting on a 4x4 table. Our respective space pixies eyed one another across mere inches of board. Team Weeping Dawn barely kept their pre-show nerves in check as they huddled behind various defences, whispering like excited schoolgirls. 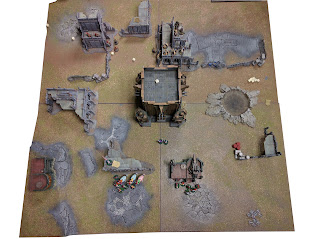 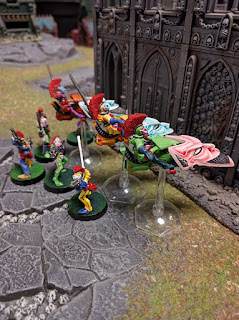 As the intro music swelled all my performers leaped forward. Some awesome moves were busted, but none more so than by Solitaire Mickie Bluecaps who gave precisely no figs and piled across the board into some Banshees. The girls were momentarily stunned by the sight of the luminous twonk bounding towards them, a veritable stripey nightmare. There was much rending of limbs leaving seven dead but Mickie injured too. 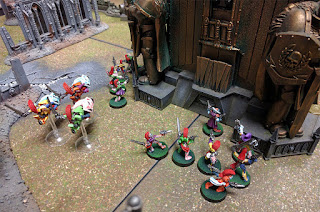 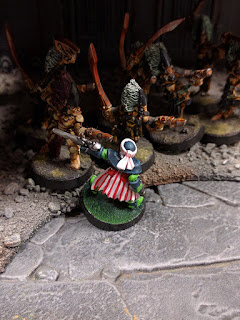 Ultra violence erupted in the centre. Several jumpsuits were soiled in fear as a pack of Striking Scorpions emerged behind the main force, and Swooping Hawks descended from the heavens. "Oh rats" thought the Skyweavers as chainswords entered their exhaust ports. At length, the Troupe Master and Shadowseer figured they needed to get their act together, and took down the Scorpions in a bloody-body-popping heartbeat. 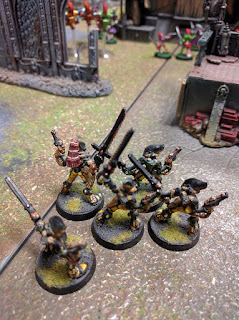 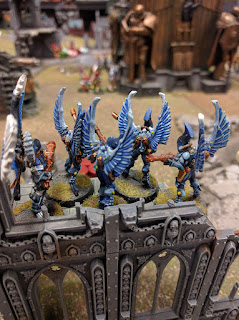 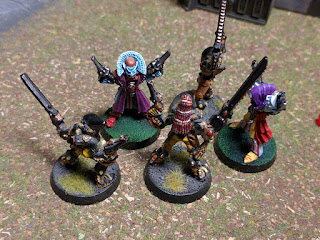 Phil's Wraithguard proved that being dead made them largely immune to Harlequin antics, and these crunchy puppets waltzed through and entire Troupe. The Troupe Master figured enough was enough, and charged the assailants. The move was short lived as their D-weaponry sent him on his merry way to meet Slaanesh. "Ah, balls" thought the Shadowseer. And he legged it to try and secure an objective. 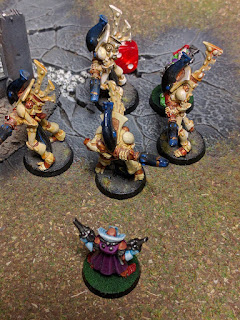 Surveying all of this was my Death Jester. He was reduced to sniggers at the sight of the Wrathguard scaling his sniper's nest in ungainly, awkward fashion. Seeing lumbering undead constructs climb is pretty funny, until you realise their implacable nature means there's probably only one outcome. And it's not good for you. Which is what happened. 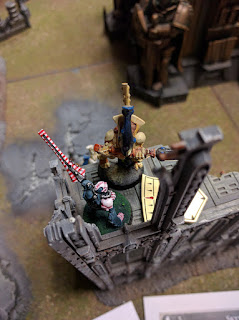 The last turn was a merry-go-round of slaughter. The remaining Banshees met their end at the hands of the Troupe holding an objective, which served them right. My last Skyweaver had his mind exploded as he attempted to ram raid the Farseer's dress. Which served him right. 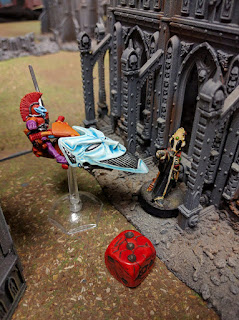 This elf-on-elf battle was clearly a well-thought-out affair because it's not like the Eldar are a dying race or anything. All in all it was a close-run thing and I won by one Victory Point. Which was slightly baffling as I thought I had lost. I reiterate my belief that Power Values are the best thing ever, leading to very balanced games. And I think the Best In Show goes to Phil's Wraithguard, who took all the shade my Harles could throw at them. Daaaamn, girl!
Posted by Tears of Envy at 20:50

Off the back of their last performance I decided that my Oldhammer Harlequins needed some fancy voodoo to ward off enemy psykers. Hence I painted up a Shadowseer. And a Solitaire just so he wouldn't feel lonely. 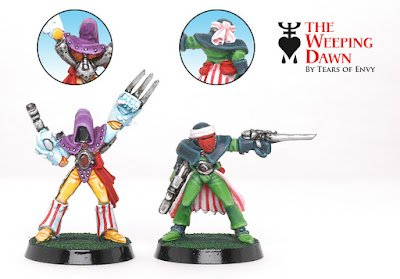 The Shadowseer is, in old money, a "High Warlock". Even in this first incarnation of his design he has his most distinctive features - a blank mask and the Mini Grenade Launcher backpack. They decided not to retain his massive bear-claw Power Fist for some reason. His wingman is, and always has been, a Solitaire. Touched by The Laughing God, he's a secretive little beggar and carries one of the Harlequins' signature weapons - the Kiss. While the Shadowseer has mastery over the fickle powers of the Warp, this guy is just nails and decimates opponents by liquefying their insides. Nice.

I've really got into the swing of painting these chaps now and I can knock out a bloke in a couple of sessions to a standard I'm pretty happy with. I pulled out the stops on these guys as they're characters. The Solitaire even has a bit of colour-shift shading going on with some blues worked under his knees to force the lighting. I've developed a technique which helps achieve a bright result overall; work out the colour scheme and paint shade values of each area directly over the bare lead. Citadel Base colours are great for this. Then spray zenith white. Now block in your main colours in mid tones and you'll find the recesses retain some shading. It does require planning but on the light areas in particular it really helps.

I put these guys to a test in a game recently against a rather famous Oldhammer Eldar army. So if you want to know if these guys came in at number one or crashed out of the charts tune in next time!
Posted by Tears of Envy at 19:17