Skulls for the Skull Throne!

For those of you who enjoy destroying puny mortals in the digital realm, you'll be pleased to hear that there is a Games Workshop Steam sale! Skulls for the Skull Throne has up to 90% off lots of licensed titles, a Twitch community and some free digital goodies.

This is a bit special for a couple of reasons; I helped set the sale up and made the marketing assets, including the rather natty logo.

So if you want to field Krell in Total War: WARHAMMER, or stomp about in Chaplain Terminator Armour in Deathwing, get over to Steam now.

Sorry for the re-post. Technical issues. Now with pictures!

My regular opponent Mr T laid down some smack talk which, after some clarification, amounted to his Tyranids wanting a bit of a scrap. I was still smarting from our previous encounter and figured this would be a good debut for my Harlequins. We turned up, kit in hand, at Warhammer World, and ended up on a strange but exquisite table. We figured it was maybe a Maiden World. With handy dandy objectives. 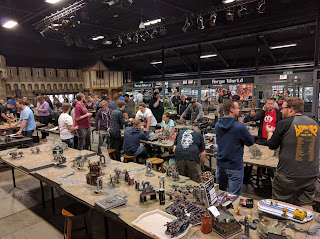 I managed to unlock the achievement of a deploying in way that was not stupid. This proved that learning had occurred since my last travesty of a set-up where I left my Whirlwind in the open. My Troupes sheltered in cover while applying the last of their makeup. On the opposite side the Skyweaver Jetbikes hovered behind a tower as they tuned their synths and complained about how their bodysuits always got so sweaty. My Death Jester, took up position in a ruin with his candy cane catapult. 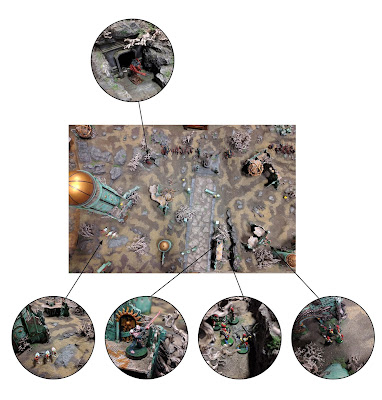 Across the clearing the chitinous hoard skittered out of the ruins. The Broodlord sniffed the air and gnashed his teeth, eager to taste some Aeldari meat.

When the beats started pumping, my Harlequins began the routine they had been practising in anticipation of their big chance. The Skyweavers grabbed the left objective and busted some victory moves. They were utterly appalled when their rhythm was broken by a massive, slavering, four-armed murder bastard jumped from the crowd and tore into them. 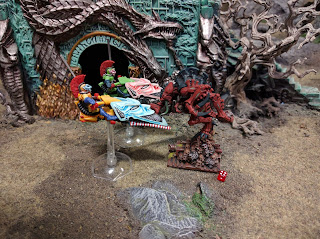 After a zig zag little number, one Troupe grabbed the centre objective. The audience went wild! Oh, wait. Maybe a little too wild. And why is that rowdy fan skewering Johnny Lasers with his talons? Cue some Harlequin kissing (no, not like that) and the offender was subdued. 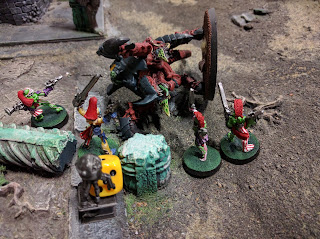 On the far right the other Troupe went for a fairly straightforward routine overseen by their Leader, Atomic Eddie. While ensuring his proteges strutted their stuff he was baffled by how offencive that big sinapse guy was being. "Maybe he's a judge?" he thought. Then casually inflicted four wounds on the thing. Soon the judge and all its chittering supporters were strewn about in pieces. Warlord down! Bonus points, surely? 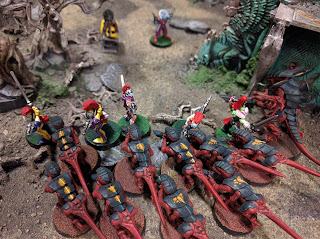 Back in the centre the crowd was going nuts! Ultimately the Skyweavers bowed out (thanks to blood loss on their part) but the Troupe was having a ball. They slayed all the Termagants with glittery backflips then dropped the mic by kicking a Carnifex in the nuts. Repeatedly. 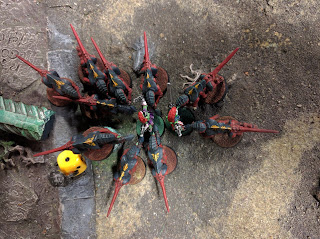 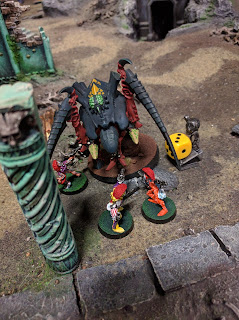 In all it was a stellar debut and I'm sure we'll be seeing more from this group. Their only hope is that they get a less drunk audience next time. In truth I was surprised at how well they did, as I was convinced I'd lost by turn two. Testament to the 8th edition rules was that I only won by one victory point, again proving that the Power Level system is very well balanced. I'd be terrified to field these guys against heavy armour, and really suffered by not having a psyker. So next up will be a Shadowseer (probably an old High Warlock mini) and some looted Robots.

Ladies and gentlemen, thank you very much. We are The Weeping Dawn. You've been wonderful. Thank you and good night!
Posted by Tears of Envy at 13:11

I've gone all Oldhammer again and painted another unit of Harlequins. These clowns will join what is now becoming a medium sized force, with ten infantry, two characters and three jetbikes (or 'Skyweavers' in new money).

I am really pleased I opted for the 'candy stripe' scheme when I started this army. It's pretty easy to paint and conjures up the circus vibe I was going for. I love the lozenge patterns which are traditional for Harlequins but the thought of rolling them out over an entire army terrifies me. Even more than the idea of bouncing murder-bastard clowns.

I would love to do a looted vehicle next to bulk these guys out. Perhaps something that 'counts as' a Starweaver? Or maybe some Imperial Robots which the Harles could program to dance awkwardly in their performances (while they chant, "Do the robot!").