You might be gurning and lumpen, but I still love you!

It transpired my cunning plan to use five, near-identical Oldhammer Scouts wasn't so sensible after all. A recent game of Shadow War: Armageddon mainly consisted of me trying to remember which Scout was which, and who was armed with what. This is neither fun, nor fair on your opponent. I needed something more WYSIWYG. And hence the two guys below. 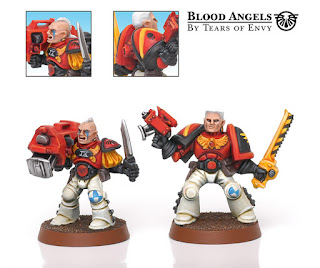 These are from the plastic sprue released with Advanced Space Crusade. Admittedly they hail from the era of gurning, lumpen plastic miniatures, but I love them all the same. While they don't have the dynamism of their metal counterparts, they do have a kind of solid charm. Plus you really can't miss that MASSIVE gun and bright yellow chainsword, which helps with my 10th Company's identity crisis. 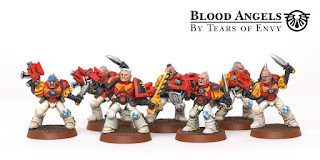 The eagle eyed nerds among you will notice that the Sergeant's pauldrons are rather mis-matched. After Rogue Trader there were several revisions to the Codex scheme of Space Marine iconography and livery. When these Scouts were released this IP was entering its current incarnation but still bedding in, as you can see in this scan below: 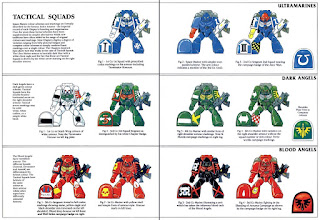 What I love about this cra-zy era is the liberal incorporation of  heraldry. I took the the Dave Gallagher White Dwarf cover and 'Eavy Metal miniature below as reference points. 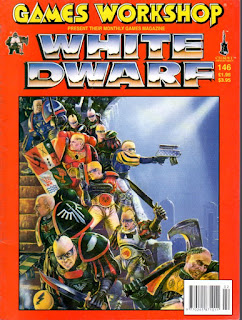 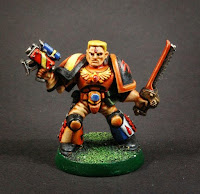 I'm not sure what I'll be painting next for my Blood Angels. Perhaps a Primaris? ;-)