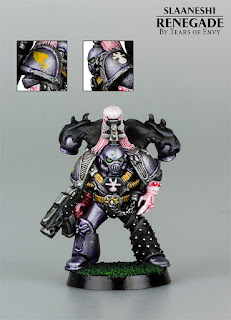 I painted this Renegade as a gift for a friend. I was pretty pleased how he came out (no pun intended).

He's actually one of the later resin casts and I think came in a pack of four, each being the classic Jes Goodwin model for each of the Chaos powers. I just love this Marine's pose. He is relaxed and haughty, demonstrating the arrogance and posturing of the Slaaneshi cult. Jes is a master of the one-piece sculpt and I just love painting casts like this.

The paint job was really simple. Leadbelcher spray over a black undercoat, then washes of ink on top for most of the plate. Additional details were blocked-in as necessary. I used the technique I'd established on my Harlequins for the pastel-pink whites. Base with a mix of white with a dash of red, wash the recesses with a darker mix, then highlight up to white. The green eyes and very simple green grass base were deliberately chosen to contrast against these warmer details.

The decals are actually from super-old sheets printed in the early 90s. I still have all my old sheets in all their shabby, cut-up glory. I'm pleasantly surprised how well they still work after 25 years.

Secretly I imagine that when he talks, this Marine sounds like Kenneth Williams.