Due to a Brazil-like administrative error, I was gifted a squad of MKIV plastic Marines which I'm adding to my growing Blood Angels collection. Here is the first combat squad, which are mid-way through their painting. I'm currently neatening up the black ready for highlighting, and adding all the other details.

Below is a close-up of two of them showing the custom decals I made for their iconography. You might be able to make out in the shot above that they also have small 'IX' Legion numeral icons here and there. These add a nice little Classical flourish which helps to ground them in the 30K universe. 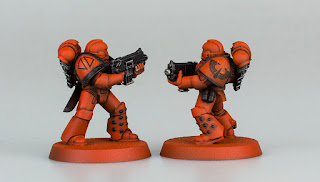 In my previous Tactical squad it was all the bonkers heraldry and whatnot which took the time. I am hoping to complete these boys in a much quicker fashion as they won't have such complex detailing. I recall an excellent seminar given by Forge World's Mark Bedford during which he talked a bit about the psychology of painting armies. In a nut shell - don't tackle it all at once and try complete a five-man squad every weekend using techniques which balance maximum results with minimum time. Most importantly put each completed squad on display with your growing army as this will inspire you to paint the next lot.
Posted by Tears of Envy at 08:24