After a few games with my growing army I decided I needed some more mobile firepower and the Razorback is an ideal solution for what is still a small force. I was really inspired by Andy Hoare's Rhino which is a gritty re-imagining of a very old Rogue Trader-era scheme. This fusion of old IP with a modernising twist is something that Forge World does so well. I decided to attempt something similar.

One of the aspects of the Oldhammer side of the hobby I enjoy is looking for precedents. This may seem like a rather odd thing to do, but I enjoy the challenge of digging through old publications to look for a jumping-off point. To this end I had a rummage and came up with the perfect solution: the Blood Angels camouflage from their assault on Bantax. So, not only was this colourway Chapter Approved, the predominantly yellow hue would complement the yellow spot colour I was already employing for my force (in the same way as the base white of Andy's tank matches his White Scars). 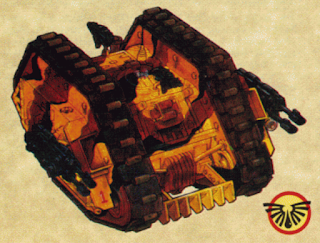 I set to my kit and subjected it to all manner of weathering techniques. I tried to keep the pin washes, airbrush-dustings, streaks and powders varied so there was never just one hue being used. This variety is what gives the result a bit of life. I dug out a variety of decals too, both old and new, which give the machine that Rogue Trader look, and these included one of my custom RT-era Blood Angel icons. One of my most cherished discoveries is that GW's Lahmian Medium is the best matting agent to run through an airbrush. I've had so many issues with spray or airbrushed matte varnishes in the past, but Lahmian goes through the machine like a dream and gently matts the surface without any chalking, streaking or other nonsense. 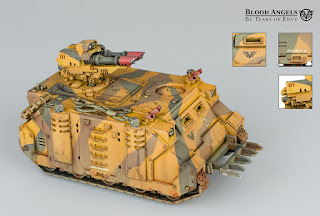 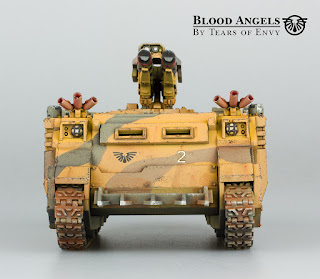 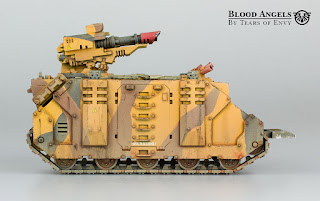 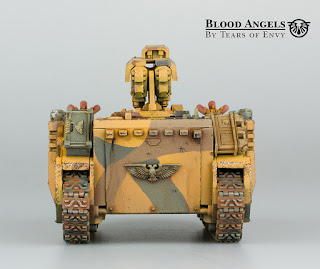 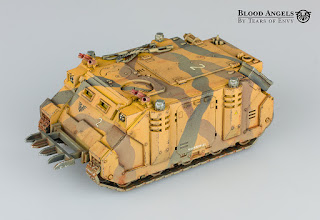 An alternative build as a Rhino.

I was pretty pleased with how it turned out and I feel I learned a lot about weathering. I like how what might have been a really eye-watering scheme has been knocked back and the form of the machine underneath is now quite defined. The danger with camo at scale is that its just too disruptive and your highly detailed miniature just becomes, optically, a broken mess. I think some of the metallics look a bit odd though and that's something I'd like to address in future. I'm thinking of doing a combat squad based on the old three-tone camo sported by the Blood Angel Captain in Rogue Trader in such a way that it matches the vehicle. 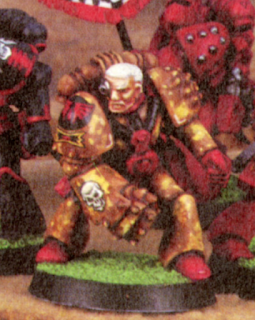