Having taken possession of a Getting Started! box of Space Marines I got stuck in with gusto. Originally I intended to refrain from converting these too much and concentrate on the painting. Well, as you can see that didn't work out. 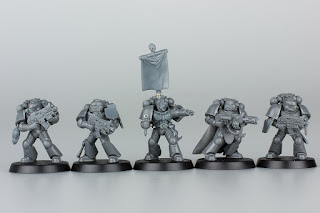 The Tactical Squad is only slightly bonkers with nothing too hardcore on the kitbashing. It was mainly a case of adding choice components, with the occasional more overt conversion like the missile launcher muzzle. I tried to choose pieces which lacked surface detail that would allow me to apply the Blanche-an schemes I intend - lots of sun-ray-arms, checks and trompe l'oeil skulls. I will paint the Space Wolf pelts as exotic leopard skins, akin to those sported by the Captain on the Epic 40,000 cover. I love the baroque touch this brings which is exactly where I want these guys to go. 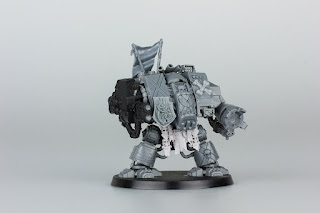 The Venerable Dreadnought was rather more involved. This guy will be painted as a Death Company suit, but will be fielded as a 'default' Blood Angels machine. To wit, I salvaged a Multi Melta arm from an old Black Reach kit, and the front sarcophagus housing is, of course, a Death Company one. My thinking is he's succumbed to the Black Rage, but he's not so far gone they've stripped him of his ranged weapon. The mish mash of components lead to the need to fill quite a few voids, which I chose to cover with accretions of detail rather than fill with putty. The crossed bones are from the old Warhammer Skeletons kit. They're quite bombastic in their scale, but I felt they just about fitted here as the machine is so massive. 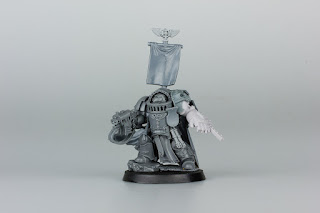 The Captain, as you can see, is where I got rather carried away. His whole pose has been altered, as he now faces to the viewer's left. The front is a spare from the aforementioned Venerable Dreadnought kit which I found fitted rather well. This almost pulpit-like 'facade' is clearly very antiquated (and possibly slightly impractical, but let's leave that aside) and is complemented by a momento mori skull pauldron and a ragged cape. The overall effect is one the kind of non-Codex Blanche weirdness I was aiming for.

The banners that the Sergeant, Captain and Dreadnaught sport are all magenetised to aid transport. I also love clicking them on and off in front of opponents as I find this level of hobby voodoo intimidates the enemy.
Posted by Tears of Envy at 08:41