I visited Edinburgh over the Bank Holiday weekend and made a trip to the National Museum. After watching the excellent 2015 film version of Macbeth, I was keen to have a look at the artifacts from the 10th century. Looming over the beautiful Nordic chess pieces, combs and brooches was a Pictish stone carved with symbols. In true 21st-century-dumbed-down-museum fashion, the accompanying blurb simply reported the Pictish origin, and flatly stated that the carvings were a mystery.

Thankfully it didn't take much of a google to find that more information is readily available. Though the exact meaning of Pictish iconography is indeed contested, there is a distinct vocabulary. One of the common arrangements which Wikipedia neatly outlines here. Two of these common schemes feature 'rods' set against crescents or double disks. The rods are perplexing, and this rather thorough article posits that they could be, among other things, spears, 'wandering' planets, or perhaps the constellation Leo. The two discs could be the sun and moon, though they do look similar in carved form and the moon is usually depicted as a sickle to distinguish it from the sun, which suggests this is incorrect. The crescent could well be the sky and its curved shape reminds me of the silhouette of the Egyptian goddess Nut, who is often shown bending over the world and the curve of her body forms the same silhouette.

Just to get a bit of cryptozoology into this discussion, the Pictish stones sometimes feature animals, one of whom seems to be a kind of sea monster. The fact he had a long snout and four distinct limbs had prompted some to suggest he's a plesiosaur or pliosaur. I love the idea of Macbeth having to fight prehistoric sea monsters (before he starts murdering kings, of course) and I am sure there is an early draft of the play somewhere in which he does this. 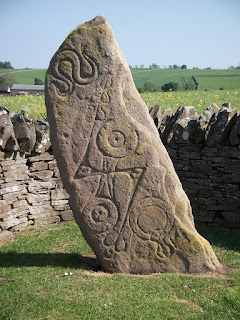 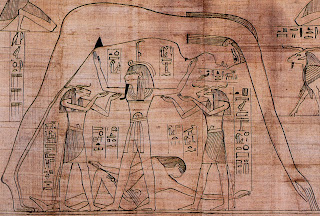 The goddess Nut forming the sky (image from Wikipedia) 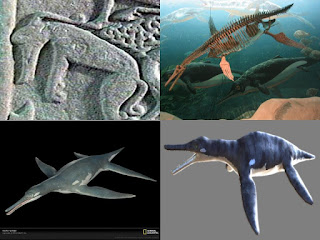