Now I'm safely out of the gravitational pull of the Bucephalus space hulk, my attention is turning once again to my 10mm Warhammer project - Death in the Drakwald.

The Drakwald itself is a vast, ancient forest running from the edge of the Wasteland to the far end of Hochland. While Mankind has made settlements there, some deep within it, the forest holds many secrets, and it does not give them up graciously. Dragons terrorised the ancient tribes and early Empire from there, until an Emperor killed the last of their kind. Still, foolhardy treasure hunters brave the depths of the Drakwald to seek the riches of a lost dragon’s lair, or perhaps their eggs, which are said to remain fertile forever and only need great heat to hatch. Deep under the forest eaves also lurk Beastmen, descendants of raiders from long ago, who breed and wait, occasionally attacking the lone farm or small group of travellers, until the time comes for Chaos to claim the north. The nobles and burghers of the province occasionally mount expeditions to root them out, but survivors always flee deeper into the forests, to wait again and regrow their numbers.

I've been thinking about more terrain. Probably thinking a bit too much, if I'm honest.

While the little cottage I painted some time ago is cute, it is a bit 'generic fantasy'. And, frankly, a setting as amazing as Warhammer deserves something better.

Previously I've touched on the psychology of early twentieth century Germany and how it led to the romantic construction of the forest volk. This prompted me to read more about the art form of the period - German Expressionism - and in particular the critical work of Lotte Eisner. While the Expressionists' attention was often on cities (most notably in Metropolis) the forest appears too in works like Die Nibelungen. There are even wonky medieval buildings in the Jewish ghetto of Prague in Der Golem. This got me thinking along the track of Expressionism as a style for my terrain. 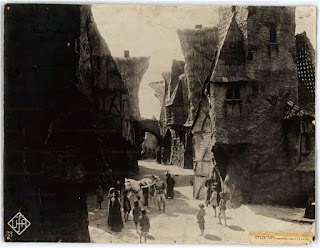 It's tempting to think of Expressionism as the caricature that it had become by the late 20th century - twisting chequered floors, janky corridors and crooked skylines all of which were endlessly cutesey-fied by Tim Burton imitators. I was pretty inspired when I discovered the intent behind the movement, which can be summed up by the term coined by Kurtz and Kalbus; landschaft mit Seele - 'landscape with soul'. The Expressionists argued that verisimilitude of the real world was simply imitation that lacked spirit. More powerful was a design which evoked the feelings of a place with shapes which had more emotional resonance.

It was this that spoke to me the most.

I've seen quite a few hobby projects which go the the n-th degree to create the miniature world in extreme detail, replete with a million kinds of flock. I must confess these can sometimes (but not always) leave me a bit tired. Something more stylised can have a much greater effect on me. Expressionist film, theatre and art wasn't all in oddly angled corridors. Der Golem and Die Nibelungen have huge exterior sets which wonderfully textured and leaning stucco buildings. It was these that inspired me to sketch out some options. 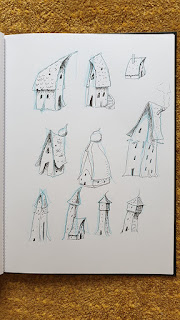 I've started sculpting my first couple of buildings. They're not quite at a stage yet where I can show them but rest assured they will get their own post soon.

Stay safe everyone!
Posted by Tears of Envy at 15:22