Death in the Drakwald - part III

Gadding-about the Drakwald isn't going to be much fun unless there's a punch up in sight. And in order to facilitate some of the old ultra-violence I purchased this from ebay: 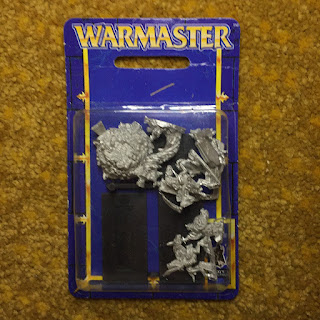 It is, of course, the character pack for the Tomb Kings (though they might just have been classed as 'Undead' when released). I bought this particular blister because it actually holds almost 10 individual minis, so I'll get a proper array of opponents for my Empire lads to duff up.

Trouble is, some of them have less-than-useful tabs on their little bony feet. This would make attaching them to my washer bases really hard. But I now have a 3D printer. So I designed some plug-in discs with apertures to hold the mini's pin. Seems to work well. 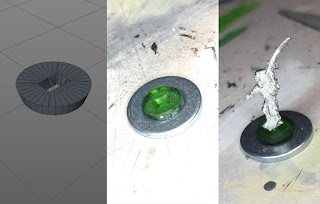 Here are some WIPs of the cadaverous fellows. As you can see I'm going for the classic Middlehammer colour combo of blue and purple, which both vibrate really nicely against the bone. I then added glowing green elements as an accent to make them pop. 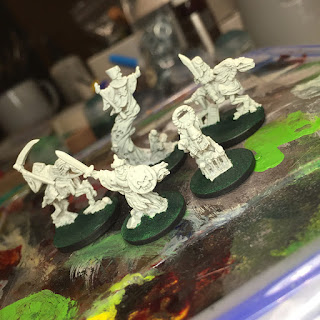 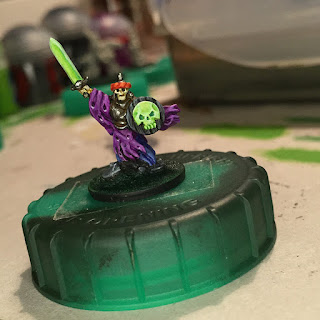 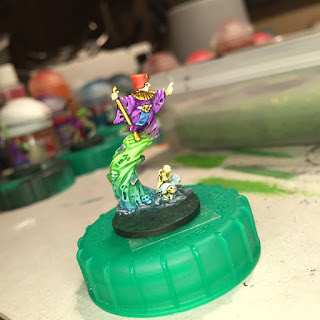 I've also been looking at GW sprues for little components which might work as terrain at 10mm scale. I came across this fellow (from one of the Ogor Mawtribes sprues, I think). 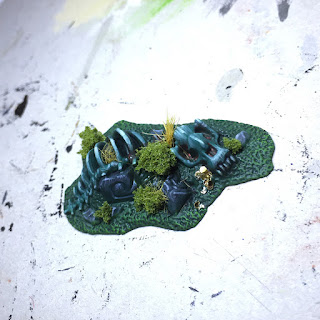 Intended to be a dead cat (or maybe dog?) at Age of Sigmar scale, he works excellently as a rather more menacing giant carcass. I added the gold coins thinking that the local folk would be so in awe of the skeleton they've been leaving pennies by it for luck (much in the same way that folk throw pennies into wells for good fortune). Yes, skeletons are all fun and games, aren't they, until a Necromancer comes along? Oh, shoot...

Better photos of all the finished things soon.
Posted by Tears of Envy at 21:04