After our 40k game Sho3 and I were up for more retro action. So we waited like a blip lurking in a dark corridor for our turn on Nico's recently completed Space Hulk board. We were joined by comrade Pat making us a trio to be reckoned with.

Now, this wasn't just any old Space Hulk board. Oh no, sir. This was probably the best Space Hulk board I've seen. Ever. Nico had done an amazing job of fitting the modular board into carry cases so neatly it looked like a commercially-designed product. You can see the thing in all its glory below and read about it here. 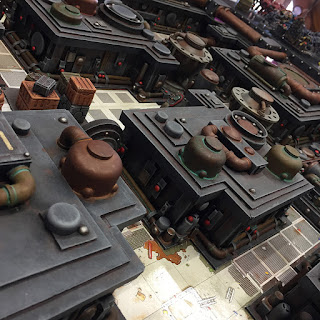 Nico had painted fantastic collection of original lead Termis and 'Stealers (yes, lead 'Stealers!) to fight across this marvellous hellscape. But had even gone a step further. He'd created more profiles for other Oldhammer Chaos ner-do-wells so they could join in the action. Each of these was accompanied by a stat card designed to look like the original Citadel Combat Cards. It was a fine mash up! 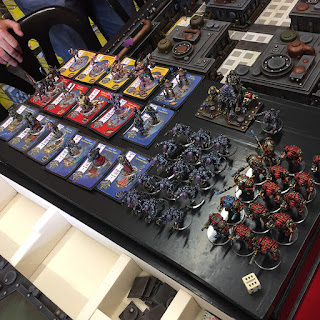 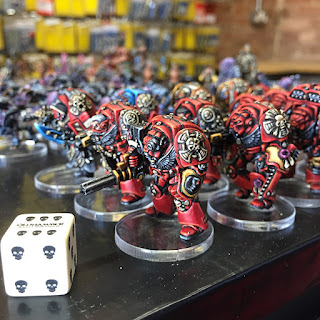 Pat, Sho3 and I decided to use our own vintage Termis. After all, they had travelled from afar and hadn't been used in 20 years so we figured they deserved an outing. Here are my lot. Forgive the awful painting. I seemed to think no highlighting and gloss varnish was the way to go back in the 90s. 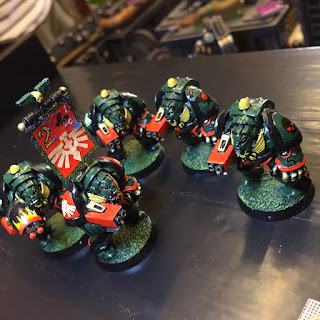 We deployed (actually we were allowed a total of10 Termis, so each used a subset of what we had brought) and Nico took control of the Hulk's denizens. This is when I remembered what a good game Space Hulk is. Really tight. Fantastic tactical play. Lots of pressure right from Turn 1. Good job on this GW. 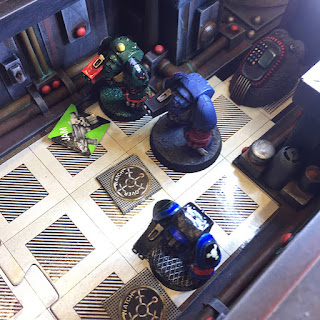 Our aim was to defend a control panel. After some um-ing and ah-ing we arrayed one guy each in front of the panel to put up a good fight if any gribbly got close enough to twiddle the dials. Hey kids! Don't touch those dials! 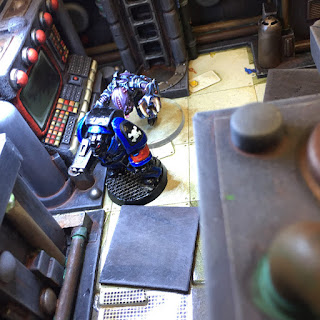 Things started pretty badly for the heroic explorers (AKA fascist invaders). We'd done an OK job with the setup but made some rookie errors. We lost a few good Termis as Nico's lads bore down on us with teeth, claws and lots of saliva. Mainly saliva. As Nico delved into his custom blip pile more and more of the Chaos weirdo's crawled out of the pipework.  Suddenly crazy *&*%^£" started showing up. Which, frankly, terrified us all. I think at one point Pat had to lie down. Pretty sure Sho3 had to run to the loo. 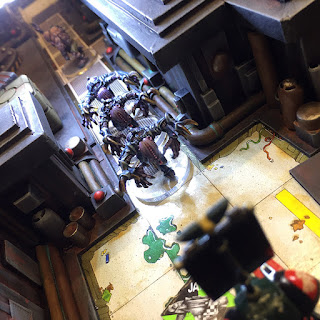 However, we got our act together and started to pull things back. Mr Banner Man did a good job of repeatedly shredding anything which poked its nose down one fire corridor. Mr Flamer Guy suppressed Nico nearby, repeatedly wiping out anything that came into view. 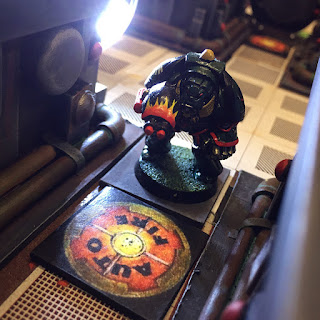 Then @#*$ got real when a disco dancin' Slaanesh Champion rocked up. We all sang Stayin' Alive when his blip was converted. It was the nerves. 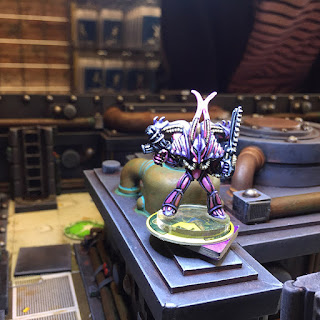 Things got tense and the Slaaneshi deviant took out Banner Man. But he pushed his luck too far and Flamer Guy toasted him. Take that, you naughty pink menace! 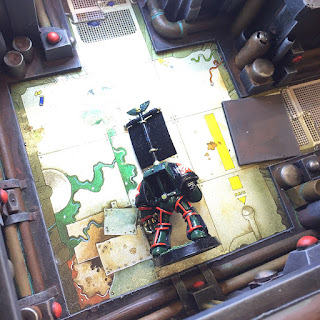 At this point it went down hill for Nico. His blips were depleted and his minions struggled to get close to the objective room. He put up a good fight though! In the end we agreed a narrow Marine victory and Pat and Sho3 retired for a mid-strength beer (I was driving). I say 'agreed' as we'd had two hours of excellent gaming and Nico needed to clear the board for the next session.  Much fun was had and I really have to take my hat off to Nico who ran a slick game on one of the best boards ever made.

Kudos, Nico! And may your blips avoid being involuntarily revealed!
Posted by Tears of Envy at 20:21