The concept of Deep Time has been around since the 18th century. The term refers to the vast spans of geological or interstellar time that lie far outside the human experience and lifespan. The aeons that passed since the formation of the universe then planet earth, or the quintillions of years until the (probably inevitable) destruction of the entire universe. Cheery stuff.

Horror and science fiction writers have harnessed this concept (and it's related cousin, Deep History) ever since the birth of speculative fiction. Nigel Kneale is one of my favourite screenwriters partly because of his deft handling of the idea. His masterful works Quatermass and the Pit, and The Stone Tape are brilliant examples of this.

Typically the storyteller's ruse is that a haunted house is built on something much older, and the ancient thing has been making everyone's life a misery for centuries. Such tales play on our fears about control. Humans love the idea that we have achieved mastery over nature by virtue of our skills and our ability to learn. Discovering that we might be prey to far older things that still exert an influence no matter how much concrete we pour over them is disconcerting, to say the least.

In this post, I want to talk about Lovecraft's handling of the topic and I'm going to use some fancy diagrams to do it. What I like about Lovecraft's work is that the Deep History is clearly articulated through the strata of his locations. He describes in exacting detail the tiers of his locations and buildings with enough information to make a floorplan so detailed you could create an RPG encounter. As the protagonists descend through the layers of, say, Joseph Curwen's shabby Pawtuxet bungalow, the reader discovers more and more about terrible secrets buried at the bottom of the dungeons.

These delvings often take a turn for the surreal. In many tales there are episodes leading to temporal distortions or wormholes (sometimes causing, or being indiscernible from, madness) which lead down strange, alternative paths. These are Deep History or Deep Time excursions 'out of aeons'. They typically reveal more information about the scope or scale of the conspiracies. But these episodes also serve a second function. They evoke our primal fears around existential nihilism. By breaking the laws of physics or showing just how utterly doomed humanity is, these wormholes imply that life has no intrinsic meaning or value. In the context of Lovecraft, this has been dubbed Cosmicism.

Without further ado, let's look at some examples. I ought to point out that this is not an exhaustive list of all of Lovecraft's stories which use this technique, but a few of my favourites.

The Rats in the Walls

The Rats in the Walls is one of my favourite Lovecraft stories because he uses Deep History to great effect. The architecture of Exham Priory reflects and is intimately entwined with the exploits of the de la Poer family. The family make use of a vast natural grotto behind a cliff face, and the tiers of subsequent generations of buildings reflect each period of their occupation. This 'stack' is topped by the Gothic manor that the reader is introduced to as the story opens. The manor is being refurbished by the last surviving member of the family, who is unaware of his heritage. A 'temporal slip' occurs at the end of the tale, as the narrator's consciousness is dragged back through time and merges with his forebears' gestalt memories. 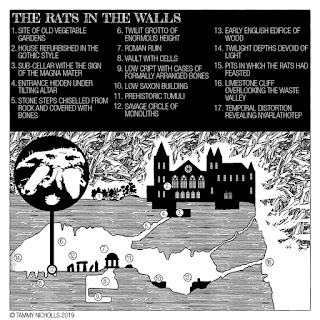 This is arguably not one of Lovecraft's best stories due to its his over use of rather dull lists and his failure to make the reader care about any of the characters. However, the titular house on Benefit Street is clearly described and the strata (including the partly exposed basement) play a central role in the tale. Buried under the packed earth basement floor is something very large and very strange which is revealed to be the cause of the occupants' misfortune. There is a minor 'out of aeons' experience here, where the faces of the beast's victims from centuries past are briefly visible in an ectoplasmic manifestation that subsumes the last victim. 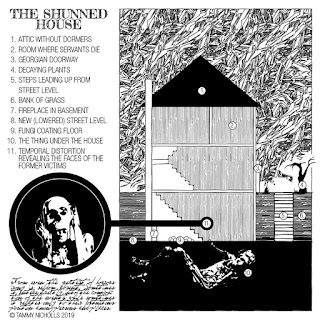 The Case of Charles Dexter Ward

Rightly regarded as one of Lovecraft's best tales and one of his few novel-length works. The story  revolves around Joseph Curwen, a New England necromancer. It is told as a substantial flashback before moving forward to the present day to detail his resurrection by his ill-fated descendant. In life Curwen constructed a base of operations under his farmhouse, which his scion finds and recommissions. The youth's doctor discovers this warren and explores it at the climax of the story. The basement is a proper dungeon, with its winding rooms and features described in some detail. There are two 'out of aeons' experiences. At the end Dr Willett falls unconscious and wakes to find the entrance to the maze mysteriously sealed by an ethereal benefactor. More interestingly, in the long flashback that starts the novel, we discover that Curwen tortured the souls of the dead to gain occult information. During one of these sessions a spirit-victim reveals information about the Black Prince’s massacre at Limoges in 1370. The soul tells of an altar in the ancient Roman crypt beneath the Cathedral there. There is, therefore, a double strata at work here facilitated by the story-within-a-story. 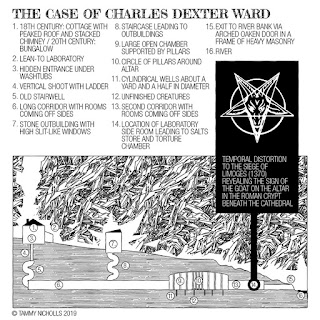 The Haunter of the Dark

This tale is one of my personal favourites. The pace at which Lovecraft reveals the horrors successfully builds a real sense of dread. It's the story of an ill-fated artist/writer who awakens an entity slumbering in the steeple of a shunned church. The beast is kept at bay by light, and when the power goes out across the city and darkness descends it is unleashed. This story is interesting from the perspective of deep time and strata. The strata are reversed - as the protagonist climbs upwards, from the undercroft to the steeple of the church he encounters more secrets and weirdness. In the bell tower he finds a 'shinging trepezahedron' which opens vistas into time and space in a manner akin to Tolkien's (later) palantir. 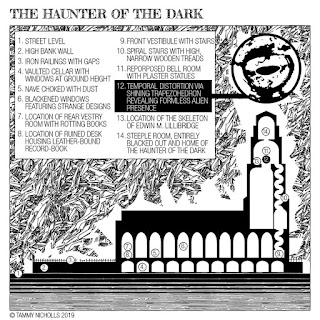