The main thrust of my Night Lords collection is going to be Heresy-era Marines. Why, then, would I start monkeying around with a bunch of Cultists?

Two reasons - first, the army will also be used for 40K, Kill Team and Necromunda (where, thanks to an excellent White Dwarf article, you can now field Chaos Cultists). Cultists play a big part in these systems and are good value as disposable troops who can sit on an objective or bog down opponents. Second, the Night Lords novels introduce some fantastic Legion-serf characters who are great inspiration for Cultist conversions.

So let me introduce to you (from left to right) Some Dude, Septumus, Octavia, Hound and Maruc.

The novels' characters served more as inspiration so there are little nods to them here and there. Like Hound's diminutive stature and his shotgun and Septimus' bionic eye. Some Dude wears a Drukhari Scourge helmet which harks back to the Bleeding Eyes Raptor units in the novels, who are portrayed as very bird-like with some disgusting avian habits.

The stand out model for me is Octavia the Navigatrix. She will represent the Witch who supports the Chaos Cult gang in games of Necromunda. I eventually settled on a weird diving-bell helmet rather than trying to sculpt on her third eye (or the bandanna she uses to conceal it). I also added her pony tail of black hair, which in the novels gets increasingly more 'ratty' as the haughty noble spends time in the service of the Legion. Below are some WIP shots of her.

Given my Marines will be dull metallic blue, I needed a matt solution for the Cultists' dark robes. The black highlighted with blue gives a real 'midnight' feel. I might roll this out elsewhere in the collection too. Amusingly, the combo of blue-black and red makes these guys feel a bit like old-skool Cawdor gangers. 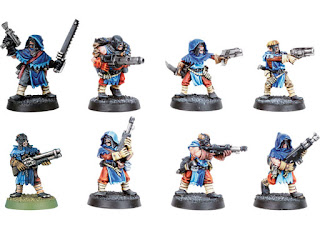 Next up, more Cultists. Or some Heresy Marines. Or some Spawn. Depending on what I finish first.
Posted by Tears of Envy at 08:04