I was super excited when it was announced that Adeptus Titanicus would be returning. Some friends and I decided to have a game of Epic Armageddon and I put together a small force of Imperial Fists for this purpose.

There's been a small but lively epic scale scene doing cool stuff ever since the game was published and one of the things that excited me about this small project was making the individual units more dynamic. To this end I copied some of the best examples out there by landscaping the bases. This works really well for the troops in particular and I was pleased with how the little vignettes turned out. I have also seen some utterly gorgeous examples of epic scale weathering and, part of the reason I chose Fists, was to enable the chipping to pop. I was pretty satisfied with the results, although I'm not sure how well it works on the dreadnoughts.

I made custom decals for the markings and banners. I really love banners for epic scale as they not only aid gameplay but they seem to capture the ostentatious nature of the Marines. The dinky little battlefield role icons on the vehicle also help to give them scale.

I'm not planning to add to much to the infantry, but I would like to paint up a maniple of titans at some point to support these guys. I am thinking Legio Gryphonicus (because: yellow) but I also love the use of the WWI German lozenge camo on some of the very early published titans so I might incorporate that. 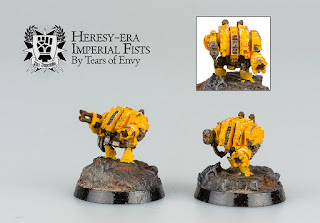