Having honed my technique for painting Blood Angles over the past few months these guys proved an ideal canvass to see how quickly it can be rolled out. Things were made a lot easier by the superb engineering and tooling of this new kit. As I mentioned when I posted my Stormcast, the new GW sprues are, without fail, exceptionally sharp and there are almost no mold lines. The fidelity also aids painting, so picking out the shoulder trims and whatnot was a doddle.

I'm also pretty pleased at how the custom decals worked out. The carrier film is thicker than commercial transfers, and in some cases its edge is a visible but its not too detracting. I'm also happy with the tiny yellow stripe (a 'pale' in heraldic nomenclature) which adds a bit of visual interest and ties these guys in with the rest of the army. As iconography it feels suitably 'Heresy', but it is also the designator of the 2nd Company which these guys were, presumably, later folded-into after the internecine conflict ended.

I added a little more weathering too. Because: Heresy. I didn't want to take it too far, and deliberated about adding the silver chips to the pauldron rims, but this actually worked out better than I expected and serves to lift what might otherwise by slightly dull miniatures. I might try silver rather than gold next time for Mr Bling's shoulder trim. That said, the new GW Gloss Shades are awesome and the patina is super-easy to achieve while retaining the shine.

I also decided to take these guys on patrol to one of the boards at Warhammer World. The reds really pop against the natural tones of the table. 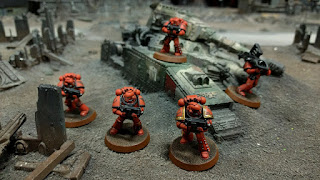 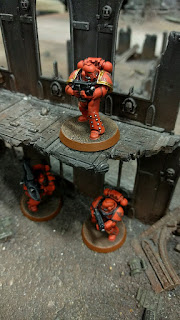 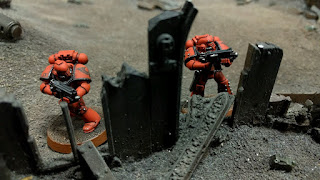