Age of Sigmar is what all the cool kids are playing these days and I decided I want to join in. I mooted several factions but was ultimately inspired to do some Stormcast with a twist. You can see the first results below.

I figured that as Sigmar draws his Stormcast from various populations of surviving humans, some may retain a little of their former culture which permeates their Stormhost. Hence we have a Stormhost formed from some rather feudal, gallant, Grail-worshipping survivors from the World That Was. I'm not naming names.

I have been reading a bit about heraldry and have become quite fascinated by the systems and language which has grown up around it. I also love the way that heraldry functions really well on miniatures, serving to inject colour, pattern and individuality into troops. A friend had also introduced me to the work of artist Kekai Kotaki who has done some really dynamic portraits of knights who have stepped out of a bonkers JRPG. 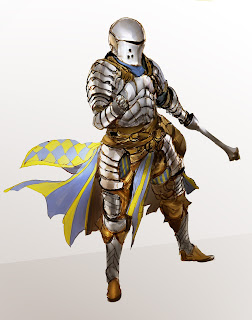 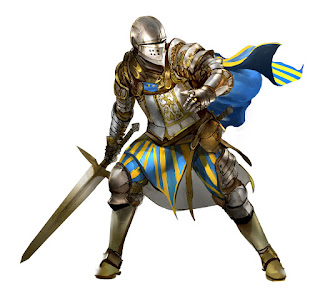 The Stormcast were perfect donors as they have a lot of the movement and refined bulk that so key to these images. Their shields would also provide great surfaces to apply the heraldry. I managed to file them down with varying degrees of success, which is why I chose to add a bit of weathering to disguise any imperfections. The weathering also helps to fool the eye into thinking the overall paint job is rather more detailed than it really is. The armour is just zenith silver spray washed with GW's amazing Gloss Nuln Oil and nothing more. The new sculpted AoS bases look great and are an amazing time-saver. Some awesome hobby friends recommended the colourway. Clearly these chaps are knocking about in the Realm of Fire, and the warm, dark base offsets the cooler, lighter miniature. The lava in the deepest recesses adds a tiny bit of interest.

I can't take too much credit for the conversions, as there are some great examples of Stormcast-Bretonnian (damn - I said the word) hybrids on the interwebs. Suffice it to say I'm stealing from the best and hopefully incrementally improving on the work of others.

I've got a load of ideas in my head for both future units and more background. I'll blog these as they come to fruition. I'm really keen to incorporate ideas that, while this Stormhost might superficially appear chivalric and Gallic, they have a deeper core of weird Cymric mythology. Fisher Princes, Poor Knights, Kelpies, Questing Beasts and Sigmar as the Mab Darogan.
Posted by Tears of Envy at 14:28