Between slightly larger projects I often dabble with a couple of minis in order to experiment. Sometimes I have an idea for a collection and they're colourway tests, in other cases the subjects are opportunities to try painting techniques. Here are two little guys which volunteered for such a dubious honour. 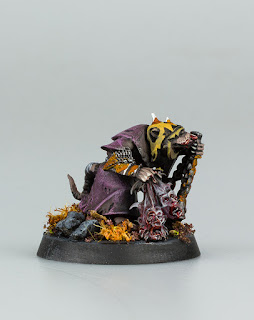 Before I settled on Stormtonnians as my AoS army, I mooted a dirty Skaven brigade based on the classic Andy Chambers army from the early 90s (you can find out more about this seminal collection here). His collection reeked of mould and the rather dirty infantry were accompanied by some amazing banners. I wanted to ape this combination and endeavoured to use a lot of dry brushing on the guy above. It's really only his hood and his flesh which is layer-highlighted. I also threw on some more modern rust and blood effects. I liked this guy, but felt the colours were a little dull and couldn't really muster the enthusiasm to do a whole army. 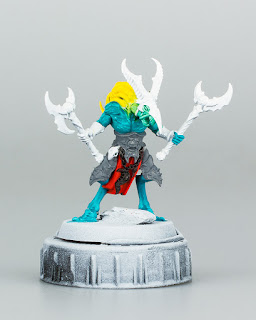 Mr Tzaangor here was a spare from the excellent Silver Tower. I've had the feeling for some time that my minis are lacking a bit of vibrancy so he is an experiment to make things a bit brighter. I rather feel there are two extremes when it comes to miniatures painting - those who strive for accurate naturalism and scale effects and those who embrace the fiction of a miniature and paint each element the colour they imagine it to be (and there are, of course, many point along this continuum too). I'm not explaining this eloquently, but hopefully you catch my drift.  There are challenges and pitfalls with both approaches, but I think I'm shifting to the latter camp. Hence the white undercoat here and the super-vibrant base colours. Since this snap was taken I re-undercoated the grey sections black to give more contrast. I have some hopes for him and will post a shot of him when he's finished.

I've also been bulking out my Blood Angels with a Heresy-era combat squad and a terminator Librarian, but more on those soon.
Posted by Tears of Envy at 07:43