Last week I took my new Blood Angels army out on patrol. There had been some worrying reports of a Xenos incursion into Warhammer World, and the boys in red were on hand to stymie any theft of biomass. To add some complexity the wicked hand of fate determined that there was a relic that the Sons of Sanguinius should save from any invaders. Thus they arrayed themselves in a battle line as their many-limbed enemies scurried into view... 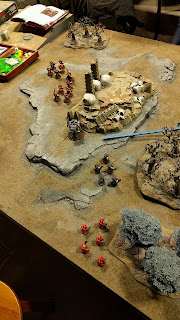 The force deployed for battle. It turns out that putting your combat squad with the heavy weapon behind a massive hill isn't such a great plan. 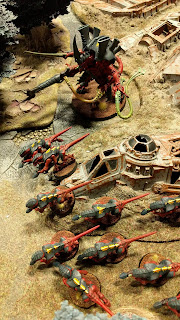 The enemy, with all their limbs on show. One of the Termagants was named 'Toto'. He took out a Taurox with a Fleshborer in a previous engagement. Smug little git. 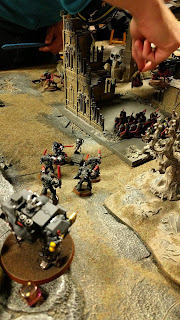 The Death Company sweep in the retrieve to catch the pigeon relic. If only there was an option to equip then with jump packs! Oh, wait... Dready Mc Dreadface supplies covering fire but it transpires that a Multi Melta only has a range of 24". Onwards he toddles. 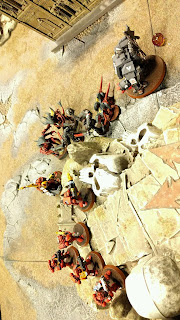 A 'dynamic' shot of the denouement. The Death Company keep shouting "Feel no pain!" like drunks on a stag do and win the day. My Captain, cunningly disguised by his giant, flashing banner, takes out two Tyranid Warriors by punching them with his foam Chainfist. Yay! Take that. And that.

I won the battle, more through luck then anything else. Alas it turned out that the 'relic' was a space hopper covered in KitKat wrappers. The Blood Angels are understandably miffed (and they can't even play with the hopper as bouncing makes them feel queasy). Next time they plan to bring a Librarian so I don't just get mauled in the psychic phase, and maybe later a Predator or Razorback as 'move or fire' does not make for a dynamic game.