The Sons of Sanguinius

Over the last couple of months I've been putting together the start of a Blood Angels army. The first two combat squads and a Chaplain are below.

I've never done Space Marines properly, always starting collections fitfully then changing my mind after only a squad or two. I'm fully intending to break this trend with the Sons of Sanguinius. Being quite fond of procrastination where miniatures are concerned, it was a rather long-winded set of reasons which lead me to the Blood Angels. I wanted a First Fouding Chapter (so I could include some Horus Heresy kits) and have markings readily available as transfers. I also wanted some Oldhammer precedents as I am keen to include miniatures from all periods of production and to match their markings to that era (the RTB01s are a good exmaple of this - check out the tiny weapon designation badges!). I also love the way you get to paint red men, black men and gold men with Blood Angels, plus maybe some Oldhammer desert camo schemes.

After a test mini or two I settled on the paint scheme, which largely relies on zenith spraying with Mephiston Red over a black undercoat (the red covers like a dream). The new gloss Nuln Oil wash is also a blessing, as it makes metallics looks grand. I added a bit of 'grit' to the Death Company unit by weathering their feet, but wanted to keep this restrained. I harvested all the plasic MkVI components I could find to make this squad, and I think I even used some modified Grey Knight legs to give some variety to the poses. The kneeling legs also worked well I felt.

I'm planning to expand the force soon but will use 'base' Space Marine kits as I'd like the next wave to mimic John Blanche's Blood angels from his amazing 40K 2nd edition and Epic 40,000 box covers. I hope to give their armour lots of Blanche-ian painted murals which will be easier with the flatter surfaces the standard Tactical Marine sculpts present. 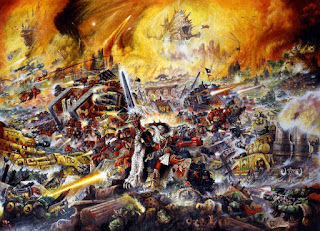 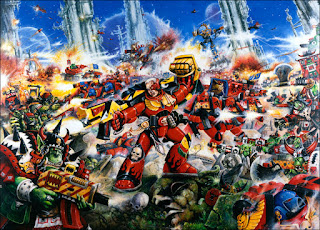