The recent history of the airbrush

I stupidly managed to loose my only cup for my old Badger single action airbrush so was rootling through ebay looking for a replacement. I realised the range and price of these tools had changed dramatically in the last ten years or so. How on earth did these things drop so much in price, and why?

I began using airbrushes as a teenager in the early 90s for illustration. I'd read that some of my favourite artists like John Blanche, Giger and Philip Castle used them habitually so I began reading about the tools and associated techniques. It dawned on me pretty quickly that these were expensive beasts - not only the brushes, but also the compressors too. At this time an OK but low-spec double-action brush would set you back £100, and compressor upwards of £200. And there was little on the market which was cheaper. I saved hard, and bought a DeVilbiss Aerograph Sprite and a load of canned air. I still have the brush today even though it's seized-up and is past the point of using.

This was the pre-digital era, of course, and the brushes were the tools of the elite. In retrospect, companies like Iwata and their ilk had a wealthy, buoyant market of fairly well-paid commercial artists and designers (or the advertising studios they worked for) who could afford their wares. Also, the brushes were precision instruments based on long-established designs and made to last, so manufacturers weren't going to make money from repeat-buys due to obsolescence.

Two things have happened over the past 25 years - the primary market for brushes (commercial art and design) has gone completely digital, and production of the brushes has been moved to places like China which is cheerfully flooding the market with lower-quality but pretty passable models. Today it's only model makers, effects artists and custom-car graphic artists who remain from the original market. They're not willing to pay two or three hundred pounds for some kit, nor are the nail artists or makeup artists who are a new, burgeoning market for airbrushes. We're all pretty happy with lower-spec brushes and are also content, price permitting, if they last a few years. Consequently China is happily churning out very affordable models and selling them by the bucket-load on ebay.

So instead of parting with £13 for a gravity-feed cup for my Badger, I'm retiring it and buying a whole new brush for, I kid you not, £11. I have no idea what the quality will be like, but for laying down base coats and varnish, even if it does only last a year it's still pretty good value. I've seen a similarly cheap model used by a friend and it gives great results.

I just want to end with a note about the Aztek. When I began airbrushing the Aztek had just come on the market and was the bees-knees. Its glossy advertising loudly proclaimed the benefits of its changeable nozzles, and the (what later transpired to be a somewhat spurious) claim that it never clogged. I was totally taken in by the marketing and unique look of the thing and really wanted one. I never did save up the sum required, and the market died shortly thereafter but the Aztek hobbles on. The brand is now owned by Testors and the brushes are sold at a considerably lower prices and marketed to modellers.

I'll post again on this topic when the new brush turns up. In the meantime, if you're at all interested in the history of these equally awesome and infuriating tools, then check out this site. I'm still blown away that the first models were produced at the end of the Victorian era! 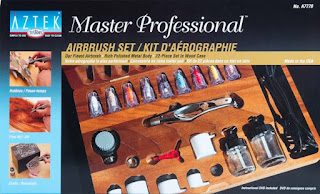 The new Testors packaging for the Aztek - note the shape of the brush, which was a massive deviation from the standard design which had been around for decades. Man, how I wanted one of these... 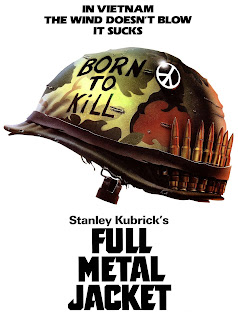 One of Philip Castle's most iconic works. His clean, high impact graphic style and his ability to render the famale form made him a staple of the commercial art scene for much of his career. He also did THE poster for Kubrick's Clockwork Orange and a lot of work for Playboy.