Below are some photos showing how my Blood Angels are coming along. I had a bit of a disaster during airbrushing (see my previous post) and ended up having to eschew my usual brush and instead employed an old DeVilbiss. It took longer but gave great results - I'm really pleased at how smooth the transitions are. 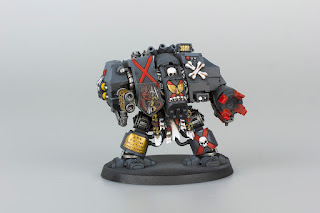 The Dreadnought (temporarily dubbed "Dready McDreadface") is the most advanced and is probably only a day or so off being finished. I considered edge-highlighting him but decided the airbrushing did most of the work. He's just had a pin wash around panel lines and rivets which makes them stand out enough. The banner is off for this shot. I think I need to add a further highlight to the red to bring it into line with my existing Death Company squad. I quite like his chubby little red fingers. 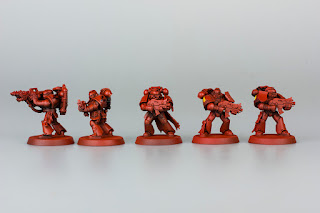 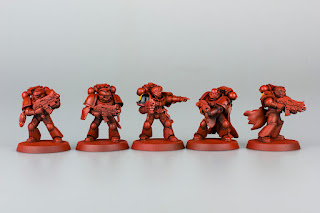 The Tactical squad is at the wash stage. I airbrushed on some gloss varnish beforehand as this does two things; decals suffer less from 'silvering', and the line-wash settles better in the recesses. I had a feeling that these guys were a bit too dark, but next to their predecessors they're actually OK. I started using some older decals I had kicking around, but then moved to those from the A4 upgrade sheet. I can't recommend these new decals enough! The varnish is super-tight to the artwork, and they fit like a dream. The yellows really pop too. The next step will be to airbrush some yellow glaze onto these guys which will variously seal the decals, knock back the gloss (GW washes have amazing matting agents) and also glaze the red to make it more vibrant. 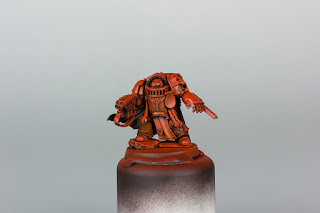 The Captain is at the same stage. I've actually applied a decal to a shield he has slung on his back. I must try and get a shot from the back sometime. I was really pleased how the wash has made all the detail on his chest pop. I think the filigree is going to end up gold, and his tabard will be yellow with Blanche-esque sun burst arms on it.
Posted by Tears of Envy at 19:27