I've just returned from a jaunt to Peveril Castle in the Peak District. The fortification is nigh on a thousand years old, built just after the Norman invasion of 1066. History was kind to the keep as it never really had to see off any serious invaders (there was a bit of a tussle over contested occupation but this seems to have been pretty swiftly sorted out).

I'd spotted the main tower of the inner bailey looming over the village of Castleton on a previous visit and was keen to return for a full exploration. As we climbed the steep slope to the rear entrance (where most visitors now enter the site) it was clear that the spot was well chosen to deter invaders. The varied scale of castles always surprises me - the walls are massively thick while the enclosures and rooms are tiny. The reconstruction drawings dotted around seem to shrink the occupants to make the spaces seem grander (granted, folk were smaller back then... but not that small).

The main tower has been gutted and stripped of most of its cladding, but is still an imposing slab-like entity. Visitors can access both the first (main) floor, and the lower basement area (probably used for storage). The sandstone has been eaten away by centuries of water to form the distinctive gouged and pitted surface, to this day perpetually slick with clammy moss. Even with braziers and perhaps a fire, you can imagine that it was a dreary, foreboding interior, albeit a safe one. We drank in the views across the valley swallows and swifts kept an eye on us as they hunted insects enticed by the morning haze, as they had no doubt been doing since the first settler arrived. Peveril's masonry contains fragments of an earlier Roman fort from the region adding another layer of temporal sediment to the physical structure.

I've only included a couple of the photos I took here (as well as my watercolour from the expedition). I'm spending more time on Instagram these days, and in the coming week I'll post more snaps of Peveril there. You can follow me here. 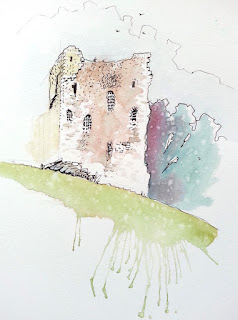 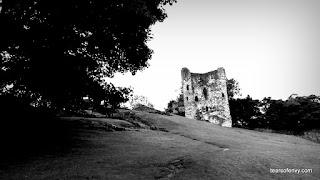 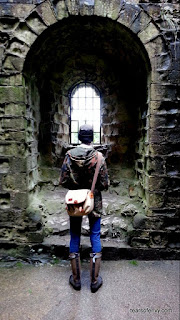